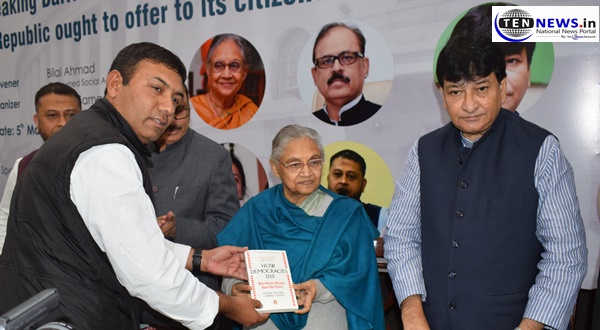 A unanimous decision has been taken there will be no ally with AAP: Delhi Congress Chief Sheila Dikshit

New Delhi: Watan Samachar forum which from time to time have organized Conference Seminars, Interactive Meets, Panel Discussion and Workshops on The Issues which are have an impact of India of Today and the future organsied a Conference on “Building fences or Breaking Barriers-what a Republic ought to offer to its citizen?” on Tuesday in National Capital.

“People who Have toxic view that the Muslims should go to Pakistan should not be elected. BJP members are elected lawmakers. Anti-Muslim propaganda and hate speeches have gained legitimacy and currency during the BJP rule.”

“In a era when media is doubted for it’s intergirty and blamed to manufacture the news under pressure by the government, it needs a strong character and guts to bring out the truth and stand up to morals.”

While talking about the alliance with AAP,
Delhi Congress Chief Sheila Dikshit sadi, ” “A unanimous decision has been taken that there will be no alliance in Delhi.”

Can’t force builders to register with RERA who already have completion certificate : UP RERA