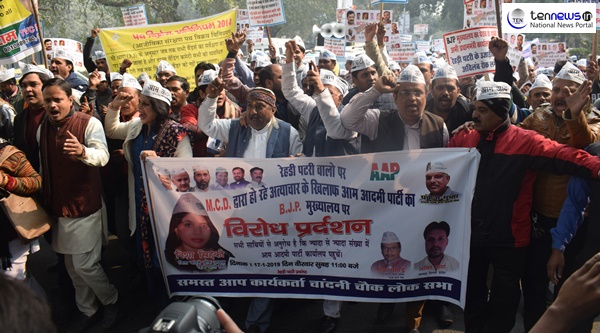 New Delhi (17/01/2019) : Municipal Corporation in Delhi, for cleanliness is taking major steps in the Capital and Road-side vendors in Delhi are facing major problems due to the damages done to them by MCD employees in the name of cleanliness .

Rehri Patri Wing of AAP today protested against BJP which is the main handler of MCD in the capital.

Speaking at the protest, many of the road-side vendors told what they faced due to the brutal treatment of MCD to them.

One person said, “Govt passed Rehri Patri Suvidha Act in 2014 but no one really cared about that. We face loss on daily basis and due to which we are facing a drop in our income.”

Speaking to Ten News, Karyakarta from Old Delhi said,
“MCD and even NDMC is unaware of the loss they are making us face due their brutal behavior while working towards the cleanliness in the capital. We are now seeking proper justice for our Rehri Patri wing which is a crucial part of our nation as they contribute almost 40 percent of people who votes.”

“Rehri Patri Act should now be taken with proper concern so as to move towards the betterment of our nation which holds a big majority of these people earning by their Rehri Patri vending works”, said one of the member of AAP’s Rehri Patri wing.

Today’s Kumbh is different from that was happened hundreds of years ago, VVSN Rao