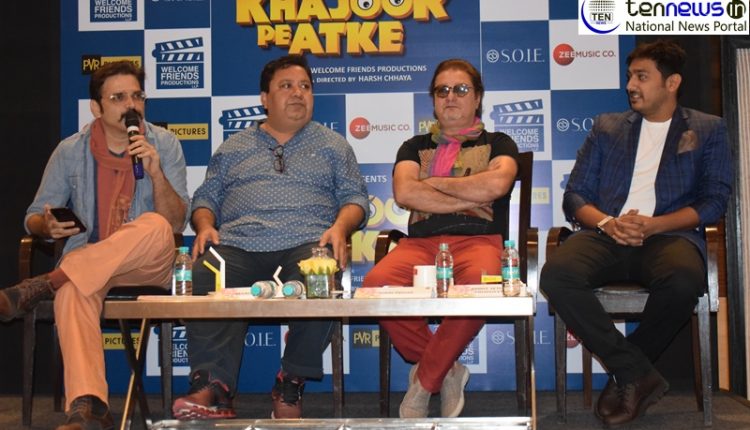 New Delhi: The Well-known versatile actors of Bollywood Industry Vinay Pathak & Manoj Pahwa are all set to hit the screens with their upcoming comedy flick ‘Khajoor Pe Atke’. As recently, both the actors were witnessed in Nations’ Capital for the promotions of their film. Along with them the director Harsh Chhaya and producer Amrit Sethia were also present to grace the event. The entire team seemed highly positive, as they interacted with media peeps in a press conference held in Hotel the Lalit at Barakhamba Avenue.

As this is the first direction debut of Harsh Chayya, he seemed excited for his film, while talking with media he shared his experiences and stated, “This is my first written & directed film. I have already been an actor but direction is a different world. While working for this film I realised a difference between a director and an actor. I learned how to work with hundred people together. It was really a great experience as we have such a talented cast like Vinay Ji, Manoj Ji and others as well. My experience with the team was simple as we already knew each other since long.” Further he added, Khajoor Pe Atke is a balanced film with a great cast. Now audience will like this film or not, it will be decided after 18th May.”

On the other hand Vinay Pathak said, “This movie is releasing on 18th May. We want all of you to go and watch this film. It’s a small movie, yes we are not promoting in a big way, I am sure this movie will entertain you all. And I am sure you guys will relate your life with Khajoor Pe Atke.” Talking about his experience he added, “I had a great experience of being a part of this family based film. The entire cast was known to us so we had amazing time together. Whereas, adding his views Manoj Pahwa, added, “Yes it’s a family film, which relates with every member of the family and what problem they face together. A serious situation in this film is portrayed in a funny manner. Peple will have fun while watching this film.”

Well, as per the details revealed Pathak and Pahwa play brothers who land up in Mumbai when they learn about their seriously ill brother. However when the patient neither improves nor passes away, everyone’s life is in a state of flux as they are unable to enjoy being in Mumbai, nor are they able to go back to their lives in their own towns and homes.  But life must go on and so too does the hilarity in their lives continue, because ultimately they are who they are and well, that itself is enough to create chaos.

Tourist Injured In Stone-Throwing By Protesters In Kashmir Dies