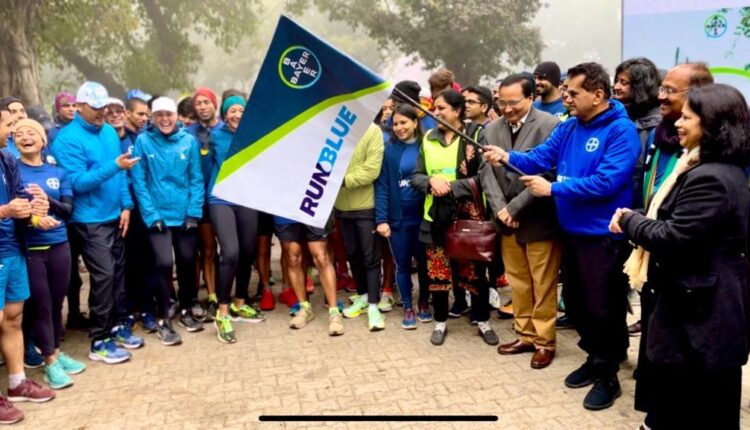 Amitabh Kant flagging off the first run under the RunBlue initiative

8th January, National: Bayer, a global enterprise with core competencies in the life science fields of healthcare and agriculture, has partnered with Mina Guli, water advocate and ultramarathon runner, to raise awareness around water conservation through the Run Blue initiative. This initiative encourages businesses and motivates individuals worldwide to come together to spread awareness, generate urgency, and spur action around water. With the realization that worldwide water consumption could be 40% greater than the availability by 2030, the Run Blue initiative plays a critical role in helping to galvanise, private enterprises, governments, non-government organisations, and society to act on the impending water crisis.

The India leg of Run Blue began today in New Delhi, to be followed by runs in other cities like Varanasi, Thane, and Mumbai. In each of these cities, Mina will run a full Marathon, to raise awareness on water. Amitabh Kant, G-20 Sherpa and former CEO of Niti Aayog, flagged off the run at Nehru Park, New Delhi.

Flagging off the run in Delhi, Amitabh Kant, India’s G-20 Sherpa, and former CEO of Niti Aayog said, “Climate change is having a huge impact on countries around the world and especially on developing countries like India. Its adverse effects on agriculture, water resources, forests, etc are quite evident. Coupled with the rapid depletion of many critical natural resources, we face a challenging future. Hence it is imperative for countries to come together to achieve the sustainability goals set by the United Nations. India has continuously met its nationally defined contribution targets on sustainability and the government’s efforts at rapidly increasing access to clean water are bearing fruit. But water conservation will also require a collaborative effort between, companies, government, and civil society and Run Blue can be an important catalyst in building up this coalition. I am thrilled to be associated with the Run Blue campaign, focused on water conservation. The Run Blue campaign supported by Bayer will inspire people and encourage social transformation for a better tomorrow”.

Mina Guli, who is the founder and CEO of Thirst Foundation is running 200 marathons worldwide leading up to the United Nations (UN) water conference on World Water Day, 22 March 2023, in New York. She has completed 151 of the 200 marathons and begins the India chapter of the run on the 8th of January from New Delhi. Through these runs across the world, the Run Blue initiative aims to bring about a systemic change that is good for the planet.

Beginning her run in India, Mina Guli, stated, “The world is experiencing acute water shortages and more than 2 billion people are without access to safe drinking water. India is home to about 18% of the world’s population but has only 4% of freshwater resources. So, it is imperative to conserve water and use it judiciously – and to protect and restore the rivers, lakes, and wetlands that provide it. If we do not act now, all of us will face a severe water crisis. Through my runs in various cities of India and along the Ganga, I hope to raise awareness about water conservation and also inspire companies, governments, and communities to commit to conserving this precious resource – and the freshwater ecosystems that provide it and that underpin our societies and economies.”

In its effort to address the global water crisis, Bayer has joined Mina Guli as a campaign partner. Bayer has made conscious business choices in tandem with its commitment to water conservation and sustainable growth. In Asia, the partnership between IRRI and direct-seeded rice is contributing to economic and ecological sustainability. At the Vapi Manufacturing Site, Bayer has installed rainwater harvesting systems, zero liquid discharge wastewater treatment plants, and put an action plan in place to reduce the overall consumption of water. With the Better Life Farming initiative, Bayer is working with like-minded partners within the Agri industry to promote efficient water management systems and a sustainable ecosystem.

Manoj Saxena, MD of Bayer Pharmaceuticals in South Asia, present for the Flag off said, “Bayer’s decision to partner with Mina Guli for Run Blue, comes from our firm commitment towards sustainability, including water. Access to clean water and sanitation is integral to ensuring a healthy life for the citizens, especially women who have the primary responsibility of fetching water for their households. Similarly, excessive usage of groundwater for agriculture is pushing the water table to a very low level in many states. In our role as a global leader in agriculture and health, Bayer aims to usher in innovations and technologies that will drive sustainable usage of water and encourage its conservation.”

Water conservation is a national priority today, and multiple initiatives have been launched to alleviate the country’s water shortage. Several initiatives, including the Jal Jeevan Mission, Namami Gange, Mukhyamantri Jal Swavalamban Abhiyan, Jal Shakti Abhiyan, and others, are being implemented both at the national and state levels to build a resilient ecosystem and provide long-term solutions to sustainable water use. Bayer’s commitment to water conservation through the Run Blue initiative aligns with the nation’s effort to increase access to clean water, conserve water resources and clean up our rivers.

PM to attend Pravasi Bharatiya Divas in Indore on Monday