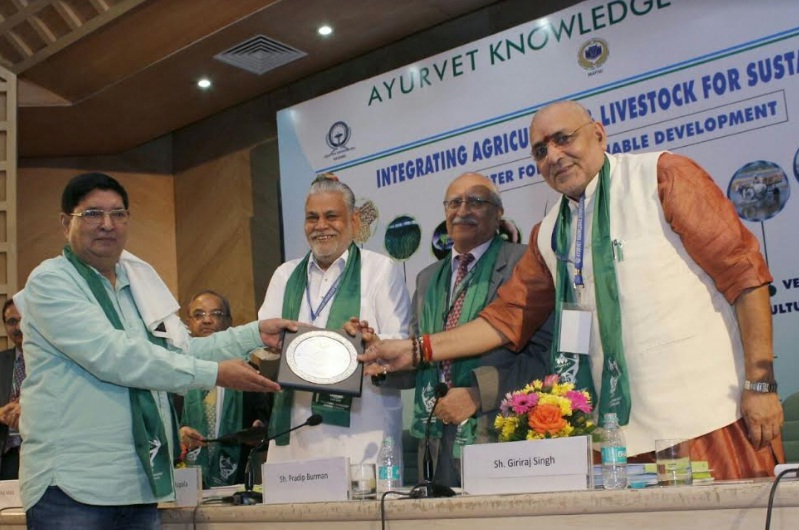 Ayurvet Knowledge Symposium on Integration of Agriculture & Livestock for Sustainability

A Knowledge Symposium-2016 was recently organised by Ayurvet Limited on the theme of “Integrating Agriculture and Livestock for Sustainability” on 12th Oct 2016 at the PHD Chamber of Commerce and Industry, New Delhi. The focus of the symposium was “Water for sustainable Development”. It was a well attended programme graced by the likes of Vice Chancellors, Directors, foreign delegates Experts, Policy planners, Scientists, Media, students and above all farmers in large numbers. The symposium and the initiative evoked an overwhelming response as it paved the way for giving a new direction towards improving the farm profits through efficient and judicious use of water, soil and other essential natural resources.

The symposium was organised in collaboration with the leading Veterinary Universities of India, RAJUVAS Bikaner, MAFSU Nagpur and DUVASU Mathura.

The chief guest of the symposium was Parshottam Bhai Rupala, Minister of State for Agriculture, Farmer Welfare and Panchayati Raj. Speaking on the occasion, Parshottam Bhai Rupala shared, “The contribution of farmers to the world is unparalleled despite the fact that climate change has adversely affected them the most. It is high time when every citizen began conserving and utilizing every single drop of water to derive the maximum output. We need to refrain ourselves from polluting and wasting water. Equally pertinent is to learn from traditional practices of agriculture and livestock, and ensure that we are not blindly following the foreign culture. The 5F security programme of Ayurvet is the real need of the hour. Without the integration of livestock and agriculture, our goal of sustainability can never be achieved. Conscious efforts should be made to avoid polluting our water reserves. Under Swach Bharat Abhiyan, we need to pledge ourselves for making our ponds and river clean. If such initiatives can garner the unstinting support of the citizens, then we would be successful in saving water for our next generation.”

In his brief speech, Guest of Honour Giriraj Singh, Minister of State for MSME said, “In the intense race for development, we seem to have forgotten that food and milk are still the basic needs for our survival. As far as agriculture is concerned, we have to keep fingers crossed owing to erratic and unpredictable climate coupled with uncertainty pertaining to availability of water. It is imperative to laud the Ayurvet team for their painstaking efforts in addressing the concerns and challenges that Indian farmers are facing. Their role in providing a sustainable solution through training and demonstrating sustainable agriculture practices and promoting Ayurveda for improving animal health is really incredible, and worth all appreciation. Plaudits to Ayurvet for developing the technology of ‘Hydroponics’. Moringa, the wonder plant should be used for feeding of dairy animals as it would help in improving the milk production and reducing the cost of feeding.” Prof A.K Misra, Hon’ble Vice Chancellor, MAFSU asserted, “The old mindset that the waste needs to be given to animals has to be done away with. There should be no ambiguity about the fact that animals too need clean drinking water for good health and for more milk production. Agriculture and livestock have to be given due importance simultaneously besides keeping the thrust on ensuring zero wastage. Hydroponics technology is a boon for providing green feed to livestock and should be given impetus.”

Prof. K.M.L Pathak, Hon’ble VC, DUVASU said, “Research has to be done towards exploring long term solution for reuse and recycling of water. The research work of Ayurvet in the field of Hydroponics technology for water conservation is remarkable. Ayurvet and DUVASU are working in tandem for the cultivation of medicinal plants and its training to farmers. This will pave the way for not just increasing the farmer’s income, but will also play a key role in the conservation of water.”

MJ Saxena, MD Ayurvet pointed, “The core purpose of Ayurvet since its inception was to integrate Agriculture and Livestock for sustainability. The sustainable green fodder is a big challenge in Dairy Farming. Ayurvet has been successful in giving a good solution by providing Ayurvet ProGreen Hydroponics Machine, which produces fodder without soil in a relatively lesser time frame, and by consuming only 5% water of conventional method. It is a matter of pride that Ayurvet is now providing 360 degrees sustainable solutions to the farmers.”

Addressing a packed house, Pradip Burman, Chairman Ayurvet shared, “Ayurvet is a responsible organization, and its manufacturing unit in Baddi is a zero discharge water unit. The focus of Ayurvet has been on cultivation of medicinal plants for raw materials so as to reduce the pressure on forests for procurement of raw materials. Apart from the health of livestock, Ayurvet is also actively working towards the execution of 5F programme for sustainability.”

Eminent educationist and journalist Dayanand Vats opined, “Ayurvet Limited has established itself as one of the country’s top ranked animal care companies specializing in 100% natural and safe herbal products which comprises herbal healthcare and nutritional products catering to a diverse range of animal species. Ayurvet thrives on a rock solid foundation with herbs dating back to the 19th century. Years of diligence and commitment have led to Ayurvet evolving today as a stand-alone company pledged solely to the cause of animal health and nutrition.”

Social reformer and thinker Bansi Dhameja added, “Ayurvet commenced operations in the year 1992 with the key objective of utilizing the merits of Ayurveda for helping mitigate the problems of the animal population. Innovation through intensive research has been the hallmark of the company, and with every passing year, the onus has been on striving even harder to demonstrate the effectiveness, safety and sustainability of herbals in improving animal health and production. Needless to say, ‘Quality assurance’ has been their key mantra towards achieving high customer satisfaction.” Sharing his views on the initiative of Ayurvet, Dr RK Tuli, Global pioneer of Holistic Medicine said, “Kudos to Ayurvet for keeping the focus of the Ayurvet Knowledge Symposium 2016 on ‘Water for sustainable Development’. The rampant pollution poses grave threats to our rivers in the 21st century owing to which there is an urgent need for exploring innovative and practical ways for mitigating this pollution. The callous attitude of the citizens coupled with the ineffective action plans of the government at different planning phases has been largely responsible for the rampant pollution in the River Yamuna for instance. The society on the whole too, needs to take the flak for the present day state of the dilapidated River Yamuna as they fail to realize the gravity of the issue especially from the perspective of the ever looming threat of climate change and global warming. Albeit a sizeable manpower is in place to manage the day to day affairs of River Yamuna, there are limitations and shortcomings in this process, just like the case with any other modern day system of the 21st century. The problem with the citizens is that we tend to have a “Take it easy” attitude towards an issue as serious as our water source that can simply jeopardize our lives once and for all. Unless there is a mass level awareness among the different strata’s of the society, the threat looming large over River Yamuna especially will continue to cause a great deal of insecurity to the humanity. People of all age groups irrespective of caste, creed or religion need to be motivated for doing their bit towards saving the Lifeline ‘waterbody’ of our country. Out of the box ideas need to be innovated for ensuring that Yamuna is cleaned from all the filth. Besides, adequate safeguarding measures need to be undertaken to check the further damage to the Holy River. Besides the government machinery, activists, volunteers, and religious heads should play their role in educating the masses about the dire repercussions of polluting the river body in the process of making the customary religious offerings to the River. Scientific methods have to be engineered in order to ensure an organic recycling of the religious offerings. If the same can be accomplished holistically, it will not only put an embargo on the usual practice of polluting Yamuna with the religious offerings, but will ensure that the same are utilized optimally. It will thus be a win win state for one and all.”

An exhibition depicting the sustainable initiatives of Ayurvet was widely appreciated by the guests and delegate members. The cynosure of everyone’s attention in the exhibition were the cultivation of medicinal plants and the hydroponics technology. School children from Om Public School demonstrated an innovative model of water conservation.

Ayurvet Limited is rated CRISIL SME – 1. The rating indicates that the level of credit worthiness of Ayurvet Limited, adjudged in relation to other SMEs is highest.