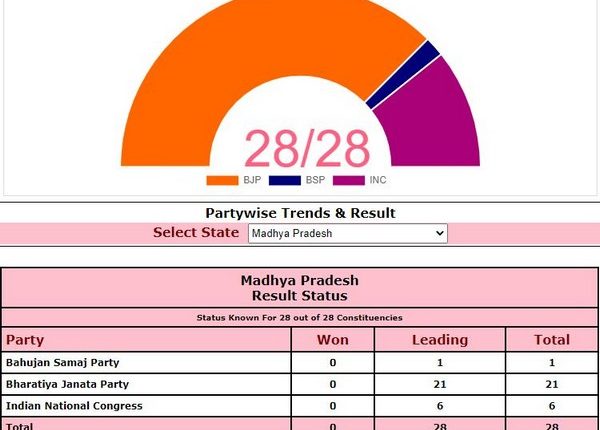 BJP leads on 21 seats in MP bye polls, Congress ahead on Six seats

The Bharatiya Janata Party (BJP) is leading on 21 seats, while Congress and Bahujan Samaj Party (BSP) are ahead on six and one seats, respectively in Madhya Pradesh by-polls, as per the Election Commission of India (ECI) on Tuesday.

As per the ECI at 3 pm, BJP’s vote share stands at 51.3 per cent with its candidates leading in Gwalior, Gwalior East, Dabra, Bamori, Ambah, Sanwer, Bandawar and Jaura seats, among others.

Meanwhile, Congress candidates, with 39.9 per cent combined vote share, are ahead on Agar, Karera, Biaora, Sumaoli, Dimani and Gohad seats.

The lone BSP candidate is leading from Morena seat in Madhya Pradesh.

The result of 28 assembly constituencies in Madhya Pradesh will decide the fate of Shivraj Singh Chouhan led-BJP government, which requires at least eight more MLAs for a clear majority in the state assembly.

Meanwhile, celebrations are underway at BJP headquarters in Bhopal as the party is leading on a majority of seats.