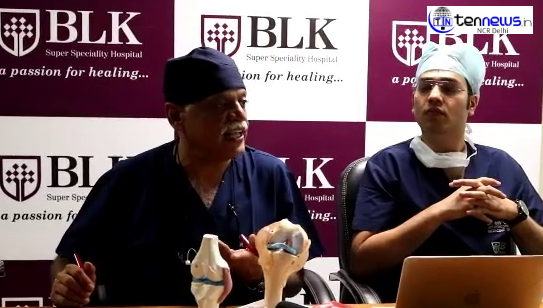 New Delhi : Jayant ( 24), an Uttarakhand State Cricket Player, had been suffering from disabling knee pain after sustaining an injury. Having consulted many doctors, he could not get an effective treatment. He almost lost all hopes on resuming his sports career for good.

His life has completely changed when he came in contact with Dr Deepak Chaudhary, Director of the Arthroscopy and Sports Medicine Centre of BLK Super Speciality Hospital. Dr chaudhary, along with his team performed Autalogus Chondrocyte Implantation (Acl) on him few years back which treated him completely and now he is back to active cricket and recently won state championship.

In a sort of record for ACI being performed in the oldest patient in the country, Dr Chaudhary has recently performed Stage 1 of this procedure that is biopsy of normal cartiiage sent for culture in Indira Devi 75yrs old female.

“During the first stage of Artnroscopic evaluation we found that she also just had a focal cartilage defect and her rest of the knee was normal. She is now scheduled for 2nd stage AD on 20th December this year,” informed Dr Chaudhary.

‘India marching ahead to make this decade India’s ‘Techade’, says PM Modi at…