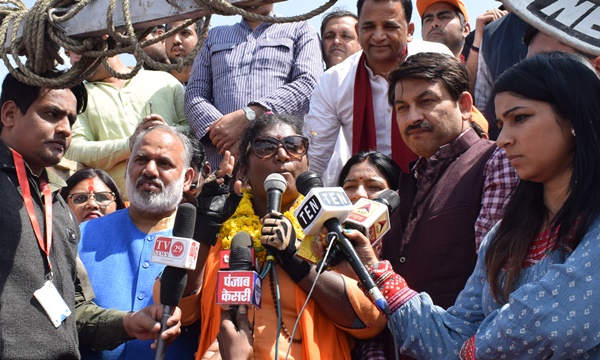 Rajlaxmi Manda, who has driven 14,475 km on her bike across 8 states, and 155 districts reached the National Capital today, ending her journey of complete passion to make Prime Minister Narendra Modi win again in the upcoming Lok Sabha elections.

Manoj Tiwari while addressing the supporters and workers said, “that, our sister Rajlaxmi Manda is an inspiration for all of us. She travelled 15000 kms across 155 districts in just 56 days is just unbelievable, and i can surely say that with these kind of support, no one can beat Modiji in the upcoming Lok Sabha elections. I congratulate Rajlaxmi Manda for her journey and salute her will power”.

Rajlaxmi Manda said that “the Prime Minister had won many hearts and had inspired her to undertake the long, arduous bike trip. I want Modiji to return as the Prime Minister and lead the nation to further prosperity. No one in this country can beat Modiji, he will surely win in the upcoming Lok Sabha Elections”.

She is accompanied by hundreds of others with heavy sports bikes.

Crane falls on a bicycle in Greater Noida, 1 woman died