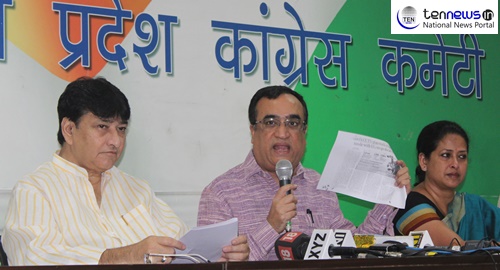 New Delhi: The tendering process of AAP’s ambitious CCTV installation scheme across the national capital has raised the eyebrows of Delhi congress.
Alleging irregularities and corruption in the scheme from fund allocation to bidding process, Delhi Congress mounted attack on AAP government on Monday.
During a press conference, Delhi Congress Chief, Ajay Maken said, in October 13, 2015, Cabinet had approved Rs 130 crore for the project and tender was floated in November 2017, however, only two bidders shown interest and later tender was cancelled.
Following to it, on February 6, 2018, the tender modified. By relaxing the bidding norms, the project fund extended to Rs 571.40 crore from Rs 130 crore. Out of which Rs 250 crore has been allocated for the maintenance of CCTV cameras for five years, which is 44% of the total project.
“Later, Expenditure Finance Committee on April 5, 2018 said, the detailed approval and action plan was to be submitted before the Cabinet regarding installation of CCTV cameras in Delhi, then, on which circumstances the tender of Rs 571.40 crore was cleared by the PWD?” asked Ajay Maken.
He further said, “When the initial cost for a project for the installation of CCTV cameras in Delhi was Rs 130 crore then why the cost was raised to Rs 571.40 crore for the same project, and the information regarding both the tenders have been deliberately removed from the website of the Delhi Government which clearly raises the fingers on the working of the AAP Government in Delhi and all this happened under the nose of Dy CM Manish Sisodia.”

“Kejriwal government has no excuse other than to blame LG for his failure in installing the CCTV cameras with there being a big scam in the CCTV cameras installation project, It may be reminded that after the Nirbhya incident, Arvind Kejriwal in the 2015 Assembly elections had made installation of CCTV cameras in Delhi a political issue for the safety and security of women in Delhi.” He added.