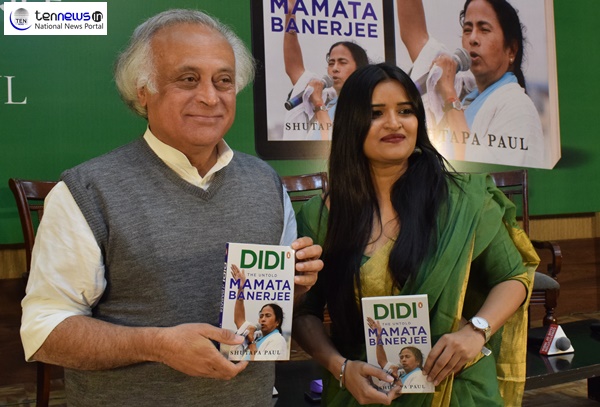 Written by journalist-turned-author Shutapa Paul, her debut novel, Didi, The Untold Mamata Banerjee, profiles the feisty leader from her school days to her time as the Trinamool Congress supremo. It tracks Banerjee’s life by talking to those closest to her, including her teachers, her political adversaries like Somnath Chatterjee, former Lok Sabha Speaker who passed away in August; Ratan Mukherjee, her political secretary for 30 years, and others.

“I had approached her in February and told her about the book. She refused to give me an interview. However, she did not in any way stop me from writing it,” said Paul.

The book launch was followed by a panel discussion on Banerjee by Ramesh, Rajya Sabha MP Swapan Dasgupta and Aam Aadmi Party leader Sanjay Singh, all of whom praised the leader for her perseverance and tenacity.

“She is a street politician, a fighter. She has been steadfastly anti-Left for 25 years and now she has shown the same tenacity in her politics against the BJP. … Her politics may be regional, but she’s a national figure,” Ramesh said.

In fact, it is her tenacity as a young political worker in the streets of Bengal that Paul said she enjoyed writing about it the most.

“She would write posters against the Left herself and put them on walls. They would remove them, but they would be up again. She would do the same over and over again. This is what brought her to the notice of the senior Congress leaders,” Paul said.

Published by Penguin India, the book, which also probably has the last interview given by Chatterjee, who was also a former CPI(M) leader, highlighted how the veteran leader, who was on a winning streak, was blind-sided by the young Banerjee, to whom he lost his Jadavpur seat in 1984.

“Mamata would be remembered in history for her seminal role in removing and decimating the Left in Bengal. What really strikes me is her tenacity and perseverance.I believe she was a little mad. You needed to be mad to take on the Left at that point in tie. You had to be crazy. She persevered like a battle axe,” Dasgupta said.

Singh said Banerjee knew the pulse of the people and, as a leader from the streets, he looked up to her for inspiration. “The democratic challenges we face in Delhi are similar to the ones that Mamata Banerjee faces in West Bengal.”

The Great Moto-Matic House : Series of books for kids, now in bookstores!