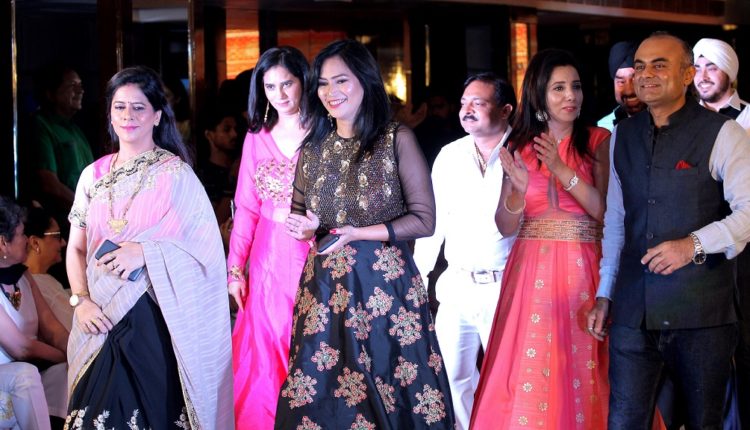 Elegance and power of “Khadi” celebrated with a dazzling Fashion Show

“Khadi Meri Shaan”, an evening to celebrate the elegance and power of “Khadi” was hosted at the city’s popular Taurus Sarovar Portico on July 7, 2018. A brainchild of two dynamic visionaries namely Conceptualizer Rajni Panwar and Designer Rosy Ahluwalia in association with Balaji Media, the highlight of the evening was a mesmerizing fashion show. Some of the top models of the fashion Industry sashayed down the ramp in exquisite Khadi wear design collections. While the evening had other components as well, the fashion show indubitably stole the thunder.

It was to be seen to be believed the enormous craze for the show as ‘Khadi in Bridal Couture’ was showcased and launched for the first time by celebrated designer Rosy Ahluwalia. The enthusiasm among the media, fashionistas and the esteemed guests was indeed a sight to behold.

It all began two months ago when senior media personality and conceptualizer Rajni Panwar synergized with Designer Rosy Ahluwalia, and the two decided to organize an exclusive evening that aimed at popularizing and promoting the ageless ‘Khadi fabric’ which has been India’s Pride since the Independence Struggle. The core objective of the initiative being to give a big boost to the Prime Minister’s ambitious “Make in India” campaign, and thus creating more job opportunities.

The event commenced with the Anchor of the show Dhaarna enumerating the key idea behind the entire event, and introducing the core team of “Khadi Meri Shaan” on the stage. The guests lauded the untiring efforts of the core team comprising Rajni Panwar, Rosy Ahluwalia, Palvinder Singh, Amanpreet Kaur, KS Kochhar and Bipin Sharma. The digital screens, stage and the ramp were all designed by Balaji Media, a name to reckon with in the field of Events & Media Entertainment.

The most awaited moment of the evening arrived when Rosy showcased her new highly captivating Khadi Bridal collections and lehengas leaving the audience completely spellbound. In the ramp walk of distinguished Achiever’s, Syle Diva Poonam Saini who opened the show, looked stunning in her resplendent Khadi wear collection.

Speaking to the media, Rosy Ahluwalia said, “The journey of khadi has been about maintaining a perfect harmony between age old traditions and modernity. Our thrust has been to reinvent the Khadi fabric into a high-fashion wear fabric. After two decades in the Fashion Industry, I feel elated to see the growing popularity of Khadi. The myth that only politicians wear Khadi has been completely busted. I have played my own role in glamourizing Khadi, and feel optimistic that Khadi will become one of the most popular fabric in the coming times.”

Event conceptualizer Rajni Panwar said, “Today’s evening has been totally dedicated to Khadi. The Punchline of the event says volumes for itself, ‘An evening to popularize and promote the elegance and magic of Khadi.’ You can’t have a better show than this with the Models along with distinguished guests comprising Society Achiever’s sashaying down the ramp in mesmerizing Khadi Design collections. We have been relentlessly striving to popularize the ageless environmental friendly Khadi fabric as it has always been India’s Pride. Heartfelt gratitude to Balaji Media and KS Kochhar, the MD of Hotel Taurus Sarovar Portico for lending us their invaluable support and guidance. The government on their part is doing an incredible job in making Khadi a “zero effect, zero-defect” global product. The government and the other key stakeholders need to join hands in glorifying the Khadi industry by taking it to every nook and corner of the country.”

Guest of Honour and Editor in Chief of Samachar Post Sushil Vakil cheered, “I wish to compliment the organizers of the show for undertaking a painstaking initiative in dedicating an evening to India’s ageless legacy Khadi. This effort will do a world of good in promoting Khadi, and eventually create more employment opportunities for those associated with this Industry.”

The movie trailor of Balaji Media’s upcoming movie, “Shaitaani Aankhein” was shown. Amanpreet Kaur, CEO of Balaji Media enlisted the various milestones of Balaji Media and how they had gone those extra miles to promote fresh talent. The salient components of Janmitra Foundation were shared by the Anchor Dhaarna during the course of the event, and its two core members Arun Sharma and Jaswant Panwar were duly honoured on the stage. The latest issue of the city based popular women centric magazine “Talash Wajood Ki” was unveiled by the Special Guest of Honours. Style Diva Poonam Saini is on the Cover Page of the Magazine.

Nawaz Sharif, Daughter May Be Arrested At Lahore Airport: 10 Facts