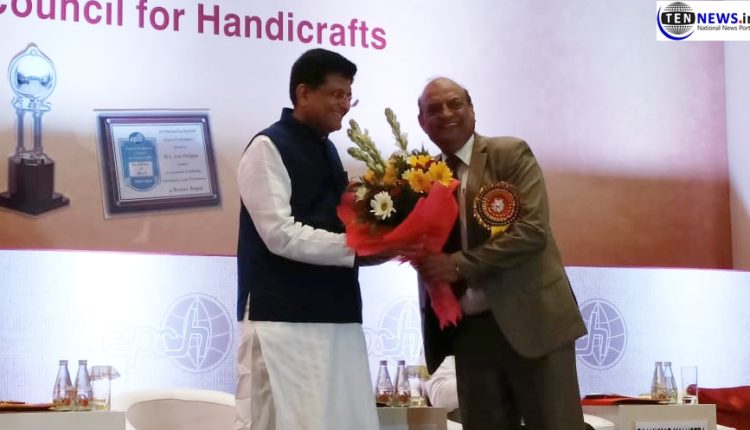 New Delhi (28/06/2022): The Export Promotion Council of Handicrafts (EPCH) on Tuesday organized its 23rd Handicrafts Export Awards on June 28, 2022, in New Delhi. The awards honor the exporters who have made significant contributions to the development and exports of handicrafts from the country. It aims to create a sense of healthy competition amongst exporters and encourage wholesome competition through the institution of such prestigious awards.

Rajkumar Malhotra, the Chairman of EPCH addressed the crowd on the auspicious occasion. He welcomed Chief Guest Piyush Goyal, Union Minister for Commerce and Industry, Consumer Affairs, Food and Public Distribution and Textile, Guest of Honor Darshana V Jardosh, Union Minister of State for Textile the Guest, and other eminent guests of the evening.

During his address, he talked about the contribution of handicrafts in strengthening the country’s economy. “The EPCH Export Awards have been a great source of inspiration to exporters from all over the country who have come here to receive the awards,” Malhotra said.

“Today’s award are being given to Handloom export council, who have excelled in doing exports during 2017-18 and 2018-19 in different handicraft product categories, ” EPCH chairman said, adding, that the handicrafts export contributed over 1% in India’s record merchandise export of 418 billion $. He said that this has been made possible because of the hardwork, dedication, and perseverance of the exporters. “Some of them (exporters) are being awarded. A total of 126 awards are being given,” he noted.

The award for outstanding export perfomance for the years 2017 – 18 and 2018 – 19 were presented at the ceremony due to the delays created by the Covid-19 pandemic.

“These awards include 39 Trophies, 3 Platinum Performer Certificates, 72 Merit Certificates, 11 Women Entrepreneurs and 01 Special Commendation award,” he said. Regional awards are being given based on the highest export performance during the last three years of a company from the region.

Malhotra also talked about the virtual fairs that were held during Covid – 19 pandemic and explained the challenges that the exporters faced during the pandemic. “EPCH was the first organization which started physical shows after the pandemic in October 2021 at the India Expo Centre and Mart,” he said.
“I hope that today’s award will motivate the entire export community to keep up the good work and achieve higher export growth,” Malhotra concluded.