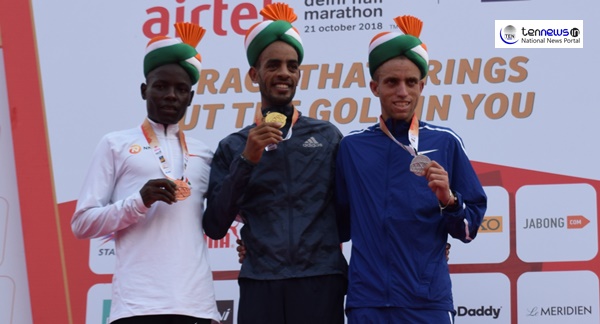 New Delhi: Celebrating its fourteenth year in the city, the Airtel Delhi Half Marathon was flagged off on Sunday from Jawaharlal Nehru Stadium and Jai Singh Marg near the New Delhi Municipal Council (NDMC) Building.

While one phase of the marathon was flagged off by athlete Adille Sumariwalla, other phase was flagged of by Delhi BJP Chief Manoj Tiwari. Delhi LG Anil Baijal, Delhi Deputy CM Manish Sisodia and former South African cricketer Jonty Rhodes, were also present at the event to encourage participants. Over 34,000 marathoners participated in different categories.

In International Women’s Category Tsehay Gemechu smashed the course record while compatriot Andamalak Belihu overcame stiff competition in the men’s elite field as the Ethiopian duo raced to top honours of the Delhi Half Marathon on Sunday. It was a first-time victory at the course for both the winners.

Zeineba Yimer of Ethiopia grabbed the last spot on the podium with a time of 1:06:59.

Along with the winner’s cheque of USD 27,000, Gemechu will take home an additional USD 10,000 for setting a new course record.

Among the Indians, Abhishek Pal won the the men’s race clocking 1:4:14 seconds. Avinash Sable grabbed the silver with a timing of 1:04:14, while Asian marathon champion Gopi T claimed the third spot on the podium finishing at 1:04:15.

Youngster Sanjivani Jadhav was the best Indian in the women’s elite field finishing with a time of 1:13:58. Parul Chaudhary and Monika Athare finished second and third respectively.

Airtel Delhi Half Marathon kicks off 14th edition with a bang