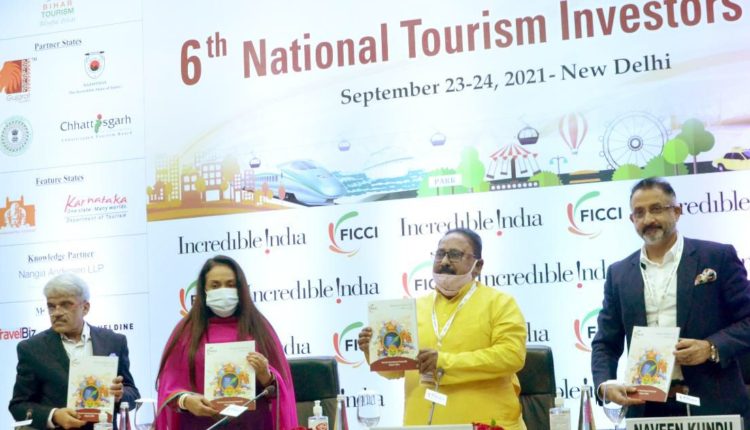 With this event, FICCI aims to catapult India’s tourism industry in the post-Covid era and to encourage investment in tourism infrastructure development. Bihar was selected as the ‘Theme State’ for this investor meet.

The 6th edition of the National Tourism Investors Meet brought together different stakeholders from the Investment and business community along with the Ministry of Tourism, State Govts, and Financial Institutions. To elevate the India’s tourism industry to new heights, experts explored the potential of investment in the tourism sector during the event.

Touted to be the biggest-ever edition of NTIM, the meet is expected attract both domestic and international investors in the long run. The inaugural ceremony of the two-day event was blessed with the presence of Narayan Prasad, Tourism Minister Of Bihar, G Kamalavardhana Rao, Director General, Ministry Of Tourism, Government of India, and Suman Billa, Director, United Nations World Tourism Organization (UNTWO), Technical Cooperation & Silk Road Development.

Narayan Prasad, Tourism Minister of Bihar in his address, said, “Bihar has immense opportunity in travel and tourism. We have created Ramayan circuit, Buddha Circuit, Gandhi circuit, Sufi circuit and many more circuits in Bihar. Recently Chief Minister of Bihar inaugurated Ropeway at Mandar Hills at Banka. Earlier it was covered in 1 hour which is now covered in 3 mins. Bihar has many freshwater lakes. Rajgir also has a new ropeway. Rajgir also has Zoo Safari, Nature Safari, and a beautiful Glass bridge. The land of Budhha Bodh Gaya is a sacred place for all of us. The Valmiki Tiger Reserve is a wonder of Bihar. Bihar is trying to promote state cuisine to all the plates of India under ‘Har Thali Mein Bihari Vyanjan’ campaign. I request the investors to come and invest in Bihar. The land of Mahavir, Sita and Buddha welcomes all of you.”

15.3 million by 2025, according to the World Tourism Organization. Travel and tourism currently account for 9.6% of India’s GDP (88% of which comes from domestic travel) and supports 9.3% of the country’s total jobs (or 40.3 million jobs). It has been almost a year since we resumed air travel operations, but air travel has been established as a safe and efficient mode of travel”

Talking about the event, Dr Jyotsna Suri, Chairperson FICCI Travel, Tourism & Hospitality Committee, and CMD Lalit Suri Hospitality Group said, “The potential of the Indian tourism sector is unending. Travel and Tourism is largest employment generator. Bihar’s participation is commendable in the effort to make India a favourite destination and make the state as an emerging state. The land of Bihar has greater values than the birthplace of Gautama Buddha in Lumbini. Bodh Gaya has greater significance hence needs to be pumped with investment. Nalanda University used to be a knowledge bank. It was also an architectural marvel.”

She further added that Every state has huge tourism opportunity. “As we all know that we are focusing on domestic tourism. Synergy between Centre and State is required. Connectivity matters are being addressed. The Covid pandemic has now waned in India and several other countries, which is a positive sign that could revive the sector. NTIM will have participation from several state governments, and they will showcase various investment opportunities in the tourism industry. I strongly believe that this edition of NTIM will attract both domestic and international investors, and it will bring revolutionary changes in the sector for sure.”

FICCI strongly believes that the Indian tourism sector is not explored completely, and strategic planning will make the country a hot destination on the international tourism map. According to Nangia Anderson LLP, Knowledge Report, ‘Tourism Investment Potential in India’, the tourism sector contributed to 6.9 percent of India’s GDP and 8 percent of its total employment.

Suman Billa, Director, United Nations World Tourism Organization (UNTWO), joined the meet from Geneva via video conferencing said, “UN is propagating the idea of investment in travel and tourism within the countries given the dent due to pandemic outbreak. Now there is a positive trend we are seeing. Investment is coming back and it is a very positive sign.The report predicts that by 2029 India’s Tourism sector is expected to grow 6.7 percent to reach Rs. 35 trillion (US $ 488 Billion), accounting for 9.2 percent of the total economy, with more than 30.5 million foreign visitors’ arrival. It will help India grow at faster pace with VCs finding it as a favourite spot. Time to create channels where buyers meet sellers, and an ecosystem/platform can be created for investment to sustain. Travel is normalising with covid numbers declining. People are ready to travel now. We need to ensure safety and hygiene standards.”

Preservation and promotion of Indian languages crucial for the unity and integrity of nation: MoS Education