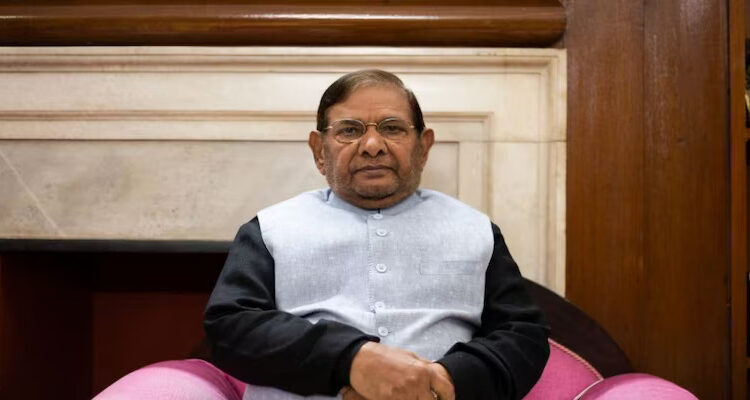 New Delhi (India), 13th Jan 2023: Veteran politician and former JD(U) chief Sharad Yadav passed away on Sunday evening at the age of 75, due to kidney-related complications.

His death was confirmed by the Fortis Memorial Research Institute in Gurgaon in a statement that said that he was brought to the emergency room in an “unconscious and unresponsive state” and was declared dead at 10.19 p.m.

Politicians across party lines have expressed grief over the demise of Sharad Yadav, who was a strong socialist leader and had a deep relationship with many other leaders. Bihar chief minister and JD(U) leader Nitish Kumar expressed shock and grief over Yadav’s death saying his demise has caused “irreparable loss in the social and political sphere.”

RJD leader and Bihar deputy chief minister Tejashwi Yadav, with whose party the veteran socialist leader had merged his Loktantrik Janata Dal a couple of years ago, said in a video message posted on Twitter that it was a great loss for the socialist fraternity.

Prime Minister Narendra Modi also expressed his condolences, saying he had a very deep relationship with Yadav and that the latter’s contribution to the country will always be remembered. Congress president Mallikarjun Kharge and senior Congress leader Shashi Tharoor also expressed condolences over the demise of Sharad Yadav.

Yadav is survived by his wife, a daughter, and a son. His son-in-law, Raj Kamal Rao, said the leader’s body will be taken to his native village in Madhya Pradesh for last rites. The leaders of various political parties have paid tribute to the veteran politician and expressed condolences to his family.