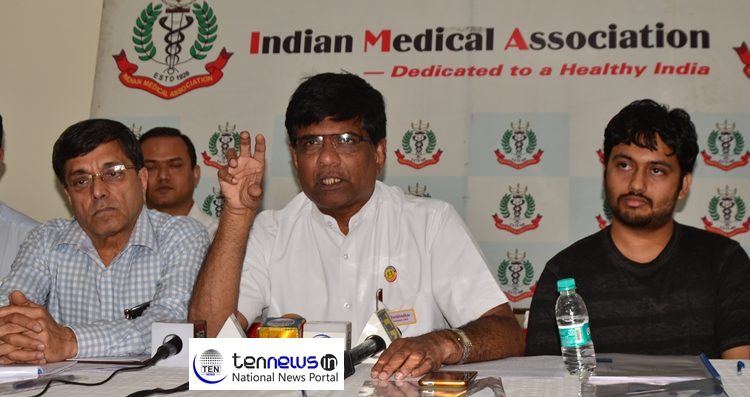 New Delhi: The Union Cabinet on Wednesday removed the provision of bridge course for Ayush practitioners to practise modern medicine, as part of amendments to the National Medical Commission (NMC) Bill.

The decision of the Union Cabinet to remove the Clause for separate Exit Examination and to have a common final year MBBS examination, amendment to drop the provision for Bridge Course to AYUSH doctors and subsequent registration to practice modern medicine and introduction of a new punitive clause for quacks and unqualified persons for practicing modern medicine were welcomed.

Although, the Cabinet approved draft of NMC Bill has marginally increased the state representation and control of the govt. over 50% of the fee levied, IMA feels that these are cosmetic in nature and the Bills still remains Anti-poor, Anti-federal, non representative and undemocratic.
He strongly expressed concerned about the un-addressed major issues like token presence of elected members, sub-optimal representation to State Governments and Health Universities and the lack of autonomy of NMC itself.

The report was tabled in Lok Sabha on 20th March, 2018, during this time a massive campaign was launched by IMA under your leadership against NMC with a vision ‘Connect with the society and consolidate the profession’.

One month long IMA Yatra conducted by Dr. Ravi Wankhedkar along with other leaders including travelling of approx. 50,000 km visit 25 states and more than 300 branches, directly connecting with the community and the membership. Cycle Yatra and cycle rallies, organization of Doctors Mahapanchayat on 25th March, 2018 as a culmination of month long IMA Yatra with approx. 25,000 doctors attending was a great show of strength consolidating the fraternity for raising voice on our demands.

The doctors’ Mahapanchayat compelled the Cabinet to agree to the recommendations of the Parliamentary Committee on Health & Family Welfare and improve on it and came out with the amended NMC Bill.
The details of the amended NMC Bill will have to be studied in detail further to decide upon the course of action, to get our remaining demands accepted through negotiation with the Govt., intensifying political lobbying and by continuing our struggle. Our pressure at each and every step to achieve maximum demands for the benefit of the fratnernity and society has to be mandate.

An emergency meeting of the Action Group has been called on 2nd April 2018 at IMA HQs. New Delhi to finalize the strategy and decide on further course of action.The Action Committee of the medical fraternity comprising of IMA, United RDA, FORDA, MSN, RDA AIIMS & Association of DNB Doctors (list attached) under the leadership of Dr. Ravi Wankhedkar, National President, IMA met on 29th March 2018 and took stock of the situation in the light of the Cabinet decision passing the NMC Bill 2017.
The Bill still remains anti-poor, pro-management, anti democratic and lack national character. The Bill does not address the issues of DNB (Diplomat of National Board) and practical difficulties with NEET and foreign graduates.

Addressing the Media, IMA President, Dr. Ravi Said, “I thank all the media persons for supporting us. Yesterday we were made aware that the Cabinet have accepted certain amendment. We welcome this move from the government. But There are some more issues have imerged.In NEET Exam we can sense corruption. The rank haven’t been disclose only marks are there so that have to be fixed. At last We welcome changes made by the government.”