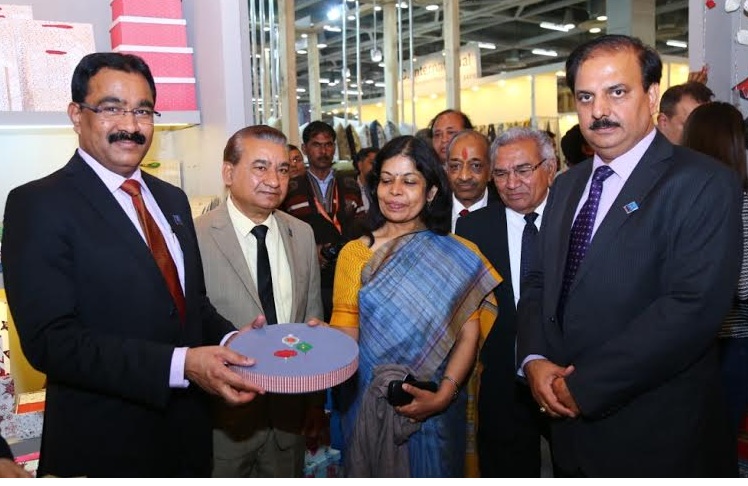 The 41st edition of IHGF (SPRING), world’s largest fair now renamed as “IHGF- Delhi Fair Spring” 2016 was declared open by Mrs. Rashmi Verma, Secretary Textiles, Ministry of Textiles at the world class venue of India Expo Centre and Mart, Greater Noida at a colourful ceremony here today. The fair is being organised from 20 – 23 February, 2016. The IHGF now known as IHGF-Delhi Fair is being organized by the Export Promotion Council for Handicrafts (EPCH) since 1994.

While inaugurating the 41st edition of IHGF-Delhi Fair Spring 2016, Mrs. Rashmi Verma, Secretary (Textiles) who has recently taken over charge as Secretary (Textiles) and attending the fair as Chief Guest for the first time said Handicrafts is an important sector both from economic and social point of view. The uniqueness of this sector include high export potential, low capital investment and immense scope for generating employment and increasing job opportunities particularly for economically and socially backward sections of the society. She further added that Ministry of Textiles, Govt. of India through O/o Development Commissioner ( Handicrafts) have undertaken various developmental and promotional activities through its on-going schemes such as creating mega cluster, common facility centres, design development and technology upgradation centres etc.

After visiting various stands of the participating companies, she appreciated the vivid range of products on display, high quality matching with the International standards. However, simultaneously she also advised the exporting community that adequate emphasis should be laid on new designs and product innovation to retain the share of Indian handmade products in the world market as the life style in the world is changing very fast.

She applauded the efforts of EPCH for constantly organizing this fair for the last 22 years alongwith other measures for promotion of exports of handicrafts from the country.

Mr. Rakesh Kumar, ED- EPCH, while welcoming the Secretary (Textiles) to the fair, said that the Council have chalked out a 3-pronged strategy to promote the exports of handicrafts and focused its efforts on products, on clusters and on markets by participating in more than 35 fairs and exhibitions being organized in different countries annually and in exploring new markets in Latin American, CIS, ASEAN and African regions where exports of Indian handicrafts is negligible. He further said that strategy has been prepared to promote the new region within India also from where presently handicrafts exports are not substantial such as North Eastern Region, Eastern Region and Southern Region by bringing artisans and craftpersons from Narsapur, North Eastern Region and Jodhpur to participate and display their crafts in the fair and provide them the direct market linkages with the domestic as well as International buying community.

ED-EPCH further informed that Handicrafts sector which is performing well in comparison to other sectors will be able to achieve the target of US $ 3233 Million (Rs. 20368 crores ) in 2015-16 and set new and ambitions target for the future years.

Shri Dinesh Kumar, Chairman – EPCH while addressing the Chief Guest and other dignitaries informed that EPCH has toiled hard to make this fair world’s largest fair for home, lifestyles and fashion products and undertaken massive publicity campaign to encourage buyers to source their requirement from this show which has been identified as a best fair for gifts, decorative and other handicrafts to source under one roof.

A Symposium on Positioning of North Eastern Region handicrafts in Domestic & Overseas markets was held on 20.2.2016.

Export Promotion Council for Handicrafts [EPCH] which is a nodal agency for promotion and development of handicrafts has been organizing the Indian Handicrafts & Gifts Fair for the last 22 years. IHGF-Delhi Fair Spring 2016 is expected to generate huge amount of enquiries and orders since large number of buyers from across the world are visiting the fair.