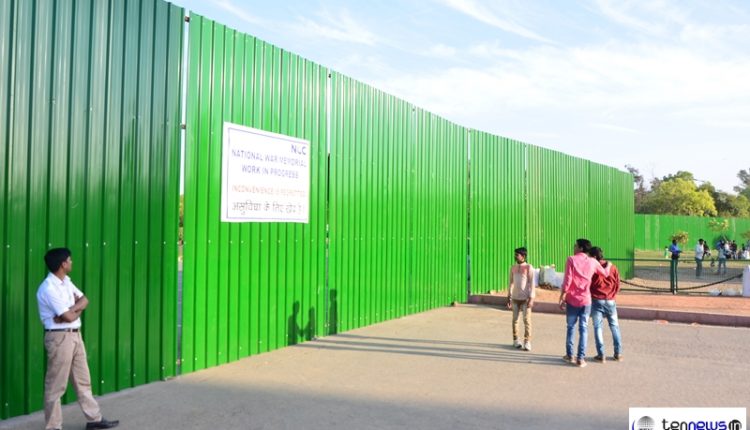 New Delhi: India Gate – One of most beautiful and prominent tourist place of the country lies in the heart of city. The place is also popular for its greenery and sheer open field where Delhiites spent most of their weekends with family but now the green filed of India Gate has shrunk due to the construction of National War Memorial there.
The new building has become centre of conversation between the daily commuters. Some are arguing that it may add beauty to the place and hassle is temporary while some criticise that the new building may steal the beauty of this place and affect free movement of people due to the security that would need to be mounted for the structure and the war museum.
With a cost Rs 500-crore, Delhi Urban Art Commission has approved to build National War Memorial at India this year. Building NWM at India Gate is almost five decades long demand of Armed forces and finally the government has approved it.

The project at the expanse around the 73-ft cupola looking on to Raisina Hill will commemorate the deaths of over 26,000 soldiers in battles and operations after 1947. The area is now sealed for both those who go there for their daily constitutional and for tourists and visitors.
The completion of the memorial, conceived as a landscaped structure with retaining walls bearing the names of all soldiers who have died in battles and operations since 1947, is scheduled for August this year and of a war museum at the adjoining Princes Park for July 2020.
The war memorial project has had a well-debated run-up. In 2012, the UPA government had mooted the plan but Sheila Dikshit, who was then the chief minister of Delhi, objected to the new structure coming up at India Gate. She said that the need to honouring the martyrs is good but, a memorial at Central Vista was not a good idea for two reasons: it wouldn’t meld with the historic aesthetics of the area, and it would affect free movement of people due to the security that would need to be mounted for the structure and the war museum.

Delhi Urban Art Commission gave its approval early this year to the Rs 500-crore project with riders. DUAC advised planners to ensure visual and physical continuity with the Central Vista.
The new building will add beauty to this place or create hassle to the people only the time will tell.

President of India Lays Wreath at Dagger War Memorial, Baramulla on Occasion of…