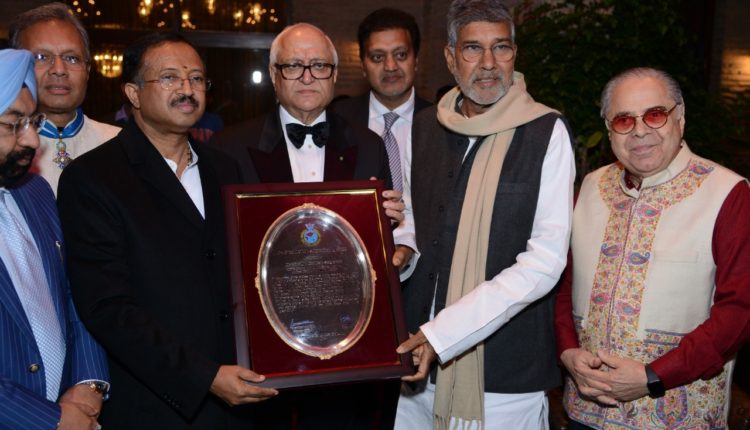 An evening was hosted by Mr. K.L Ganju, o.c.v.c (cdr.), Consul General (Hy.) and Advisor to the Foreign Minister & Members of Board of Directors of Honorary Consular Corps Diplomatique-India to celebrate the Consular Day and New Year. On the occasion 2 New trophies were unveiled namely Dr. Bhai Mohan Singh Trophy and Consul of the Year. Dr. Bhai Mohan Singh trophy was presented to Hon’ble Mr. Kailash Satyarthi, Nobel Laureate and Child activist and Consul of the year trophy was presented to Mr Vijay G Kalantri famous businessman and President of All India Association of Industries

The Chief Guest for the event was H.E. Mr. V. Muraleedharan, Minister of State of Foreign Affairs, Govt. Of India while the other names included High Commissioners, Ambassadors, Officials of the Ministry of External Affairs, Hony. Consul Generals and who’s who of Delhi. Some of the names were Business tycoon Mr. Vivek Burman of Dabur, Dr. Naresh Trehan, H.E Daniel Chuburu Ambassador of Argentina to India, Mr.Abhishek Manu Singhvi, MP Rajya Sabha, Entrepreneur Vikramjit Singh Sawhney, Dr. Herbert Traxl to name a few. Value of Rupee against Dollar from 58 to 73 in 5 Years : Congress calls BJP big failure on both economic and social front

Odd-even system to end in Delhi, read what all will be allowed in new unlock from…