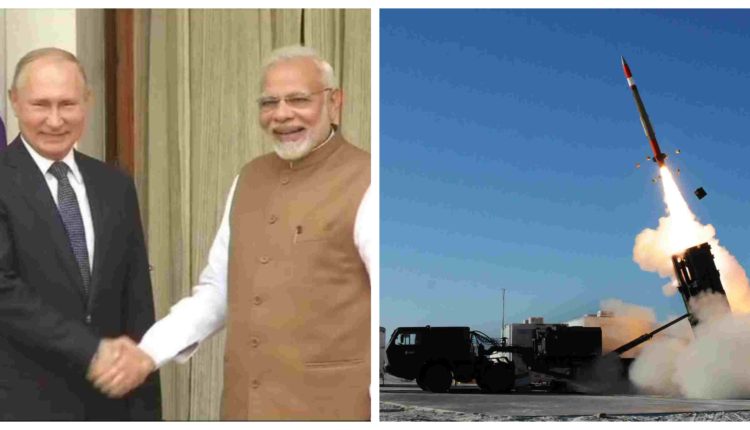 New Delhi: Prime Minister Narendra Modi and Russian President Vladimir Putin finalised a series of defence deals worth $5 Billion, including the sale of the S 400 Missile Systems to India. The Russian President’s two day visit of the capital culminated with the signing of several MoUs at the sidelines of the Indo-Russian summit.

Analysts were divided over whether the purchase of the S 400 systems would go through, given the United States’ repeated warnings to the international community against defence procurements from Kremlin. The NDA government had taken several steps in the past four years to improve relations with the United States and its allies given the country’s need for foreign investments. The move is sure to raise some eyebrows in Washington, given India’s strategic importance to the United States in countering China’s growing influence in the South Asia region.

The S 400 missile systems are state-of-the-art missile defence systems that detect violations in airspace or an incoming and hostile projectile. After detection, the system launches a missile to neutralise the incoming threat. The previous version of the missile defence system, the S 300, has been recently deployed in the Syrian Arab Republic by the Russian Aerospace Forces to protect the Syrian skies against future air strikes by Israel and its allies.

From a geopolitical standpoint, India has reinforced its age old neutral stance by rekindling an old and emotional relationship with the Russians. Prime Minister Narendra Modi and Russian President Vladimir Putin have significantly increased the scope of defence cooperation between the two states, almost at par with that of the Cold War era. The series of deals with Kremlin is also a strong statement to Washington that India will refuse to play ball with greater powers in the geopolitical arena, and instead choose to forge its own alliances and create its own sphere of influence as it continues to strive towards becoming a superpower.

Whether the United States imposes sanctions on India is still unclear, given that several US officials have previously suggested that waivers might be introduced to help India circumvent the applicability of economic sanctions. The Russian economy has been in tatters thanks to US sanctions following its annexation of the Crimean Peninsula from friend turned foe Ukraine in 2014.

Defence deals aside, the two world leaders signed off 8 pacts, including a pact to develop 6 nuke power projects in India. Several MoUs for signed to help strengthen cultural ties and promote higher education, with the introduction of several benefits for Russian and Indian students wishing to study abroad in the other country.

India and Russia have been historic partners, with the erstwhile Soviet Union being a close ally of India during the Cold War era. Most famously, the Russians deployed submarines in the Bay of Bengal to ward off approaching American warships that were coming to the of the besieged Pakistani army in East Pakistan during the 1971 war. Even though the two nations have shed their socialist tags since, the two allies continue to have a special bilateral relationship which is unaffected by geopolitical currents or realpolitik considerations.