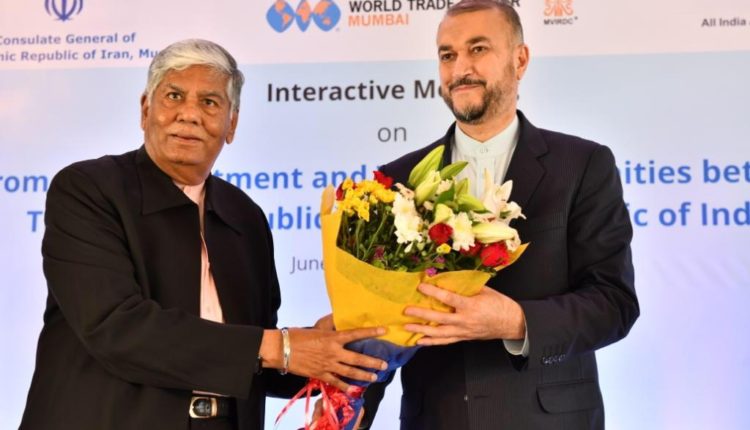 New Delhi (11/06/2022): “India and Iran have centuries old trade relationship. To take this relation forward, I had fruitful discussion with Senior Ministers of Indian government to delineate long term cooperation roadmap. The Deputy to the first Vice President of Iran is travelling with me to India to give shape to this roadmap. Both the sides discussed the possibility of rupee-rial trade and agreed on a conducive legal mechanism to promote two-way commerce. Iran is exploring an alternative banking mechanism, within the framework of the international law, to promote two-way trade with India. I had a fruitful discussion with Senior Ministers of Indian government to establish such a banking mechanism,” said H.E. Dr. Hossein Amirabdollahian, Hon. Foreign Minister of the Islamic Republic of Iran at an interactive meeting in Mumbai. The meeting was organised by World Trade Center Mumbai and All India Association of Industries (AIAI).

Hon’ble Minister pointed out that under the progressive leadership of Iran’s President and Indian Prime Minister, our bilateral relations will only move forward and not backward. Iran, which has signed a 25- year long strategic agreement with China, is also exploring long lasting strategic partnership with India.

Speaking about his meeting with senior ministers of Government of India on June 8, 2022, Dr. Amirabdollahian informed that he discussed partnership on economy, culture, tourism, science & technology.

Hon’ble Minister also informed that half of Chabahar Port has already started functioning because of investment support from India and we expect further investment from India to precipitate going forward. In addition to Chabahar Port, Iran has also activated North South and East West Transit Corridors to support trade with other countries. 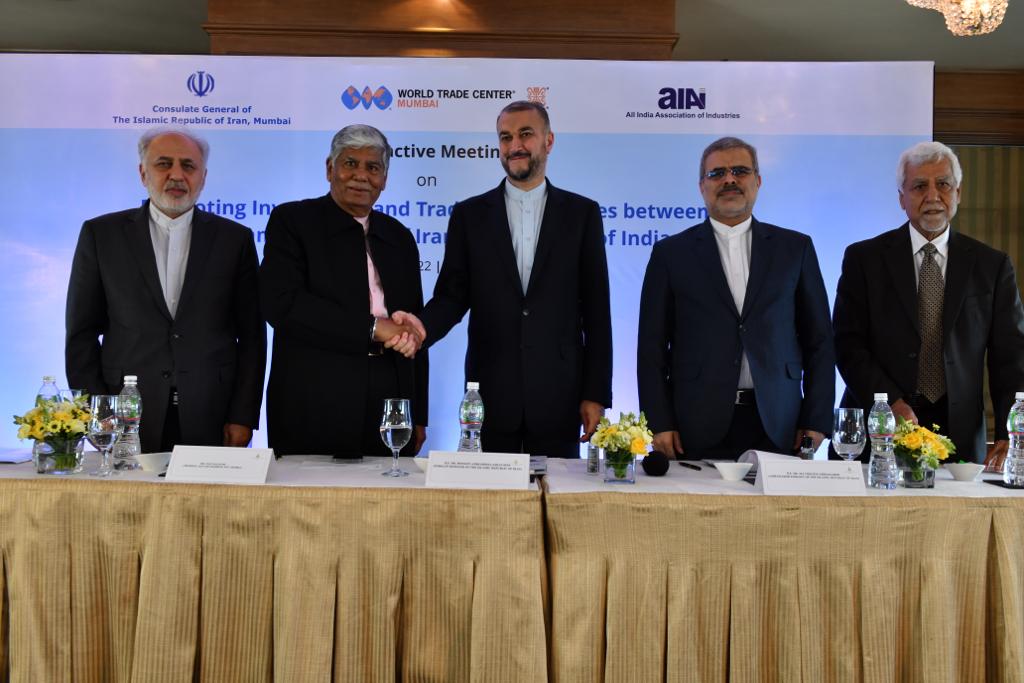 Dr. Amirabdollahian invited Indian companies to explore trade and investment opportunities in Iran by assuring that the new government will provide conducive business environment to protect their commercial interest.
In his remarks, H.E. Fattah Ahmadi, Deputy Minister of Judiciary, Government of the Islamic Republic of Iran informed that Iran is clear in its intention to support trade and investment ties with India by signing an agreement on mutual legal assistance in civil and commercial matters.

Earlier in his welcome remarks, Dr. Vijay Kalantri, Chairman, MVIRDC World Trade Center Mumbai and President, All India Association of Industries (AIAI) pointed out, “WTC Mumbai and AIAI have been supporting trade with Iran for the last 20 years. Currently, two-way trade with Iran is hardly USD 2 billion; but there is untapped potential to raise it to as much as USD 50 billion if both the countries launch rupee-rial trade or barter trade. By launching rupee-rial trade, we can reduce transaction cost and increase volume of trade. WTC Mumbai is signing an agreement with Government of Iran to promote cooperation in agriculture, irrigation, artificial intelligence, Information Technology, green energy, start-up enterprises, waste water management and other sustainable development areas.”

He pointed out that both the countries can explore trade in pharmaceuticals, education, IT, engineering textile, machinery and new age sectors such as green energy, hydrogen and sustainable development. Finally, Dr. Kalantri called for forming a working group with the Ambassador and trade mission of Iran in India to address challenges in two-way trade.

A key highlight of the event was the signing of Memorandum of Understanding between the Government of the Islamic Republic of Iran and World Trade Center Mumbai to promote bilateral trade and investment. Under the MoU, both the sides will support mutual cooperation in food processing, agriculture, irrigation, green energy, Artificial Intelligence, Information Technology, waste water management etc. WTC Mumbai and Government of Iran will also partner in vocational training, skill development, exchange of trade intelligence, technical and business delegations, participation in trade fairs for the benefit of MSMEs and start-up enterprises.

Similar MoU was also signed between All India Association of Industries (AIAI) and Government of the Islamic Republic of Iran. Capt. Somesh Batra, Vice Chairman, World Trade Center Mumbai proposed vote of thanks for the event.