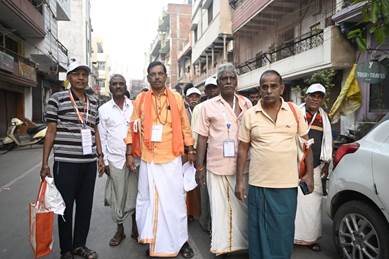 Kashi (23/11/2022): The second batch of delegation from Tamil Nadu attending the month long ‘Kashi Tamil Sangamam’ festival took a holy dip early in the morning at ‘Hanuman Ghat’ situated on the banks of the river Ganga. Earlier known as ‘RameswaramGhat’, the ‘Hanuman Ghat’ is one of the most visited Ghats of Varanasi. The surrounding areas are thickly populated with South Indian Maths like Kerala mutt, Kanchi Math, Sankara Math, Sringeri Math, etc.

After the holy dip, the delegation visited Subrahmanya Bharti’s residence at ‘Hanuman Ghat’. Members of the delegation expressed their gratitude as they could relate to their customs, traditions and culture.

The second batch of the Tamil delegation also comprised of a group of artisan and traders. After that they visited Trade Facilitation Center (TFC) to get first-hand experience of the museum located in TFC Center. At the museum, the splendor of handloom products from across Purvanchal region and replicas of the archaeological objects of Sarnath were showcased to the guests. A cultural program was also organized at the TFC for the visiting delegation where in some of the members also actively participated. After the cultural programme, later on during the day, they were taken on a tour of Sarnath.

The delegation will reach the BHU Amphitheatre from Sarnath in the evening and also attend the cultural programme. They will also be visiting various stalls at the venue. The 75 stalls comprises both North and South Indian boutiques wherein artefacts, handloom, handicrafts, traditional attire, north and south Indian food, etc. are on display for both the delegation and the local people of Varanasi.