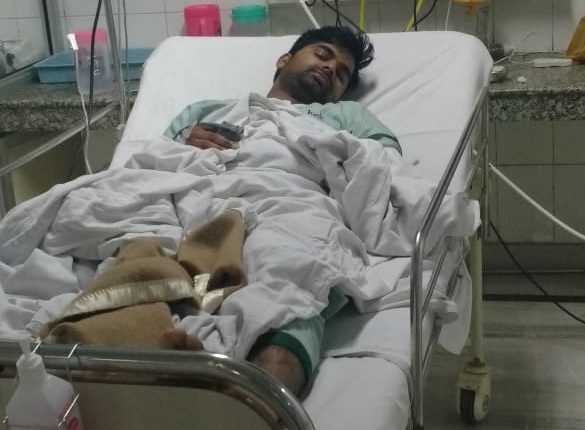 Greater Noida: On Monday evening a final year law student was shot nearby District Court complex by unidentified criminas. Eh was shot while returning to his home from the district court, where he is interning with a senior advocate.

After the attck he was taken to Kailash hospital and is under treatment for bullet injury on his left hand. He is now out of danger and responding positively to the treatment.

As per the information the victim has been identified as Kapil Nagar a resident of Village Atta Gujaran.

According to victim himself “I was on my way to home in my WaganaR, 500 meters ahead of Rohan Motors an Alto rammed into my car and three unidentified men opened fire on me. I tried to run across the road but due to heavy flow of traffic was not been able to cross the road. They fired 3 to 4 rounds from which one bullet hit my left hand.”

After receiving the information SP Rural also reached the hospital and took details of the incident and gave directions for investigation and arrest.

Elaborating further about the incident, CO Amit Kishore said that Prima facie incident is looking of personal dispute over 50 thousand rupees. For now family members of victim have named three suspects 3 persons over which a FIR is been registered. We had started search for arrest and the accused will be nabbed soon.