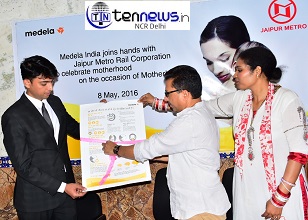 Jaipur, 8th May, 2016: On the occasion of Mother’s Day, Medela India, the world’s leading global producer of breast pumps and nursing accessories partnered with Jaipur Metro Rail Corporation Limited (JMRC) to celebrate Motherhood. This partnership entailed a public awareness drive through a special session organized for Mothers and Metro passengers at the Chandpole Metro Station’s.

This session was to promote breastfeeding and spread awareness on its benefits to mother and the child. Present on the occasion to advise the mothers was a Lactation Consultant, who counseled the mothers on their simple queries on breastfeeding and to bust all myth related to it. The event was aimed at spreading knowledge on breastfeeding through reading materials like brochures, flyers, posters, leaflets etc., and also through interaction with the Lactation Consultant.

Speaking on the importance of Breastfeeding, Dr. Victoria Kumar, Education Manager and In-House Lactation Consultant, Medela India said, “Breastfeeding is beneficial for both, mother and baby. The health benefits of mother’s milk are tremendous and impact the child for good through their lifetime.Breastfeeding is the Best Feeding as it impacts the overall mental and physical development of the child. It gives the child an incredible sense of security which is known to have a positive influence on the child’s psychological development into adulthood. Hence, mothers should take the breastfeeding decision in order to nurture their child’s health.”

Jaipur Metro Rail Corporation has been the frontrunners in taking this initiative and recognizing the need of spreading awareness on the importance of breastfeeding. Talking further on this initiative, Mr. C.S. Jeenger, Director Operations, Jaipur Metro Rail Corporation said, “. We are very proud to support this noble cause and our commitment is to take all steps to enable mothers to be able to breastfeed their children. We inaugurated Amrit Kaksha in December 2015 and made it the first ever public initiative for providing Mother’s an environment in a public area to be able to breastfeed. This initiative is our little contribution towards a healthier future of India. We would also like to express gratitude towards Medela India, who have come forward voluntarily to support us for this noble cause, which will soon become a benchmark and set standards for the rest of India to follow.

Appreciating JMRC’s initiative, Mr. Vishwanath Kannan, Marketing Manager Medela India said, “We are privileged and grateful to JMRC for letting us partner with them to spread awareness on the importance of mother’s milk. This occasion is a platform to reach out to mothers and explain to them the importance of mother’s milk in the overall development of the child. Mother’s milk is the only natural source of nutrition in the first six months of the child’s life. We not only support in spreading the awareness on the benefits of breastfeeding but also through our research based innovative technology  provide products that help mothers to be able to provide their milk to the child even when they are not around. As a company we promote the importance of mother’s milk across the globe but an initiative like the Amrit Kaksha by JMRC is definitely a milestone for India and others to follow.”

Founded in 1961 by Olle Larsson in Zug, Switzerland, Medela continues to grow under the ownership of the Larsson family. Medela serves customers through a worldwide network of distribution partners in more than 90 countries and its 18 subsidiaries in the United States, Switzerland, Canada, Germany, Sweden, France, Benelux (Belgium, the Netherlands and Luxembourg), Italy, Japan, Russia, the United Kingdom, China, Spain, Australia, Poland, India, Singapore and Bravado. The company entered the United States more than 25 years ago; its U.S. headquarters are located in McHenry, Illinois.

Medela provides the most technologically advanced, superior-quality breast pumps and breastfeeding accessories to nursing mothers around the world. A longtime champion of breastfeeding, Medela is the only company to develop products based on research by the world’s leading lactation experts. As a result, Medela’s breast pumps are the number one choice of healthcare professionals and healthcare facilities worldwide, including 80 percent of U.S. hospitals.