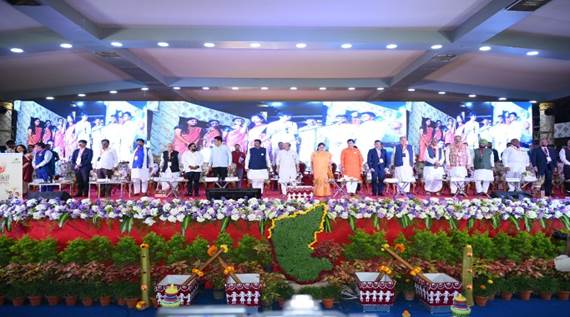 The trade fair is a platform for farmers, farmer groups, domestic and international companies, central and state institutions in organic and millet sector to connect and explore opportunities in agriculture, horticulture, processing, machinery and agri-technology. The Government of Karnataka has been a leader in promotion of millets – The first Organics and Millets Fair was held in 2017, the second and third editions in 2018 and 2019 in Bengaluru.

The inauguration of the international conference was done by Shobha Karandlaje, Union Minister of State, Ministry of Agriculture & Farmers Welfare. In her address to the farmers and other participants, she called for cultivation of quality millets with optimal use of pesticides that can be taken to international platform which would help them in gaining competitive prices for their produce. The Government’s commitment to increase farmers’ income can be seen through significant rise, witnessed in agriculture exports.

Kailash Choudhary, Union Minister of State, Ministry of Agriculture & Farmers Welfare in his address highlighted that the budget allocation towards farmers has increased 6 times under the leadership of Hon’ble PM Narendra Modi. Additionally, he also said that the country is focussed on developing 10,000 FPOs and aiding farmers in setting up sorting and grading units, along with production of value-added products which are export ready. He emphasized that consumption of millets is the solution to malnutrition, which will also benefit farmers to get better livelihood and increased income.

Shubha Thakur, JS (Crops), Ministry of Agriculture & Farmers’ Welfare appreciated the model of Karnataka State Government in millets promotion. She said, “Karnataka has been distributing millet grains through the PDS system, organising district-wise kisan mela. Further to that, farmers in Karnataka have helped boost food production, especially during the covid pandemic, by cultivating millets.” She also added that, in the coming year, National Food Security Mission (NFSM) programme will be reconstituted to the National Food and Nutrition Security Mission, paving the way for millets to reach the global forum.

The fair will be concluded on 22nd January, 2023 with a speech by Secretary to Government, Department of Agriculture, Government of Karnataka, followed by distribution of awards by Narendra Singh Tomar, Union Minister of Agriculture and Farmers Welfare and an address by him to attendees during the event. A cultural programme has also been planned on the last day of the fair.

With the aim to generate mass awareness, increase production, productivity and strengthen the value-chain towards promote ‘golden grain’ Millets as the avenue to food & nutritional security, accepting Government of India’s proposal, the United Nations General Assembly (UNGA) has declared 2023 as the International Year of Millets (IYM) – 2023. The declaration has been instrumental for the Government of India to be at the forefront in celebrating the IYM 2023 in a grand manner. Honourable PM of India, Narendra Modi has also shared his vision to make IYM 2023 a ‘People’s Movement’ alongside positioning India as the ‘Global Hub for Millets’.

‘Millets’ were among the first crops to be domesticated in India with several evidence of its’ consumption during the Indus valley civilization. Various types of Millets, currently being grown around the world were first cultivated in India. Being grown in more than 130 countries currently, Millets are considered traditional food for more than half a billion people across Asia and Africa. In India, millets are primarily a kharif crop, requiring less water and agricultural inputs than other similar staples. Millets are important by the virtue of its mammoth potential to generate livelihood, increase farmers’ income, and ensure food & nutritional security all over the world.

Towards this endeavour, through a collaborative approach, the Government of India urges everyone including the Indian embassies, International Organizations, Academia, Chefs, Media, Indian Diaspora, Start-up communities, Civil Society, and all others in the Millets value-chain; to come forward and join hands to revive the forgotten glory of ‘Miracle Millets’ through the grand celebration of International year of Millets – 2023.