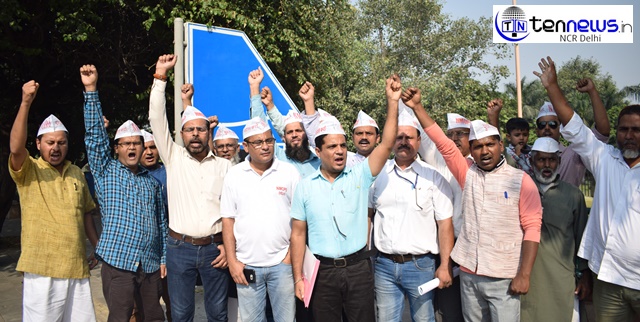 The NPS started with the decision of Government of India to stop defined benefit pensions for all its employees who joined after 1 January 2004. While the scheme was initially designed for government employees only, it was opened up for all citizens of India between the age of 18 and 60 in 2009.

According to the members of NMOPS, this pension scheme changed all the views of government employees who joined government sectors after 1 January 2004.

“From 1st January 2004, whosoever joined government services were provided with a pension based on share market. And the National Pension Scheme is nothing but a plan provided by share market. According to which, the pensions for employees after retirement now are 1200, 800, 600, 1600 or 1400. This is really a bad step taken by government for government employees who worked for the betterment of nation’s public.”

Ample of people today, raised their voices against NPS in various part of India. They approached the people of Central Government under whom their area is.

Krishan Kumar, a railway official who was one of the core team of NMOPS was very upset with the pension scheme as government is unaware about the impact of NPS in the lives of people.

He said,
“We worked hard for the amelioration of the public. We should be provided with what we deserve. Government should know if we are not provided with justice, railway workers can lower down the services they provide.”

Amusingly, over a decade into its existence and after mopping a corpus of over Rs 24,000 crore as of 2013-14 from a little over 1.3 million people, the NPS still has critics, who wanted it scrapped. “The larger federations and staff associations advocated scrapping the NPS on the ground that it discriminates between two sets of government employees,” Anil Kumar, from Delhi University noted.

NMOPS on 26th November, will gather at Sansad Marg for reaching the center of government. All the members of NMOPS from around the nation will arrive with their demands.

Procedure for Research on Vaccine