Major shift in our strategy is needed to market the best of higher education abroad and not just the talent, as at present, to reap rich dividends from internationalization of India’s Higher Education, said eminent academician Prof. PB Sharma while chairing the plenary session on Promoting Indian Higher Education Abroad, at the North Zone VCs Conference concluded today at Galgotia University, Greater Noida.

The accelerated outflow of talented Indian students for higher studies abroad and near stagnant inflow of foreign students to Indian universities should compel us to think seriously and work out implementable strategies for effectively marketing India’s higher education abroad. After all, there are great many institutions of higher learning including IISc, IITs, IIMs, AIIMS, IISERs, NITs, BHU, DU, JNU, DTU, Anna University, Jadhavpur University, Punjab University and a good number of other high quality higher education institutions both in the public and the private domain, such as Amity University, VIT, SASTRA and BITS Pilani that are known for decades to offer high quality education and research opportunities at a highly affordable cost.

These avenues of quality higher education should offer a valid reason for the inspired minds from around the world, including the students from the advanced nations such as USA, UK, Canada and Australia, where the cost of quality higher education is staggeringly high to come to India for higher education in STEM and also in areas that matter today more than ever before such as Yoga, Meditation, Ayurveda, Vegetarian Food Tech and to taste and enjoy the cultural and philosophical heritage of India that offers a holistic package of creating a new world of peace, prosperity and the divine bliss that the world requires today more than ever before.

It however is greatly disturbing to read the RedSeer Report, which reveals  that almost 1.8 million Indian students would be going abroad by 2024, spending huge foreign exchange of the order of around 85 billion US dollars to meet the expenses of higher education in countries abroad that include USA, UK, Canada, Australia and other advanced nations of the world. It is ironical that the sum total of foreign exchange spent by the projected 1.8 million Indian students amounts to 6.8 lakh crore Indian rupees, which is almost 15 times higher than what we, as a nation  spend here in India as our annual higher education budget (India’s budgetary allocation for education, including higher education is pegged at ₹1.08 lakh crores for 2022-23, almost 50% of which goes to higher education). Further, against such a large outflow of talented Indian students going abroad, the inflow of foreign students to India is stagnating around 50,000 per annum for the past many years. If any, it has further gone down due to the impact of COVID-19. 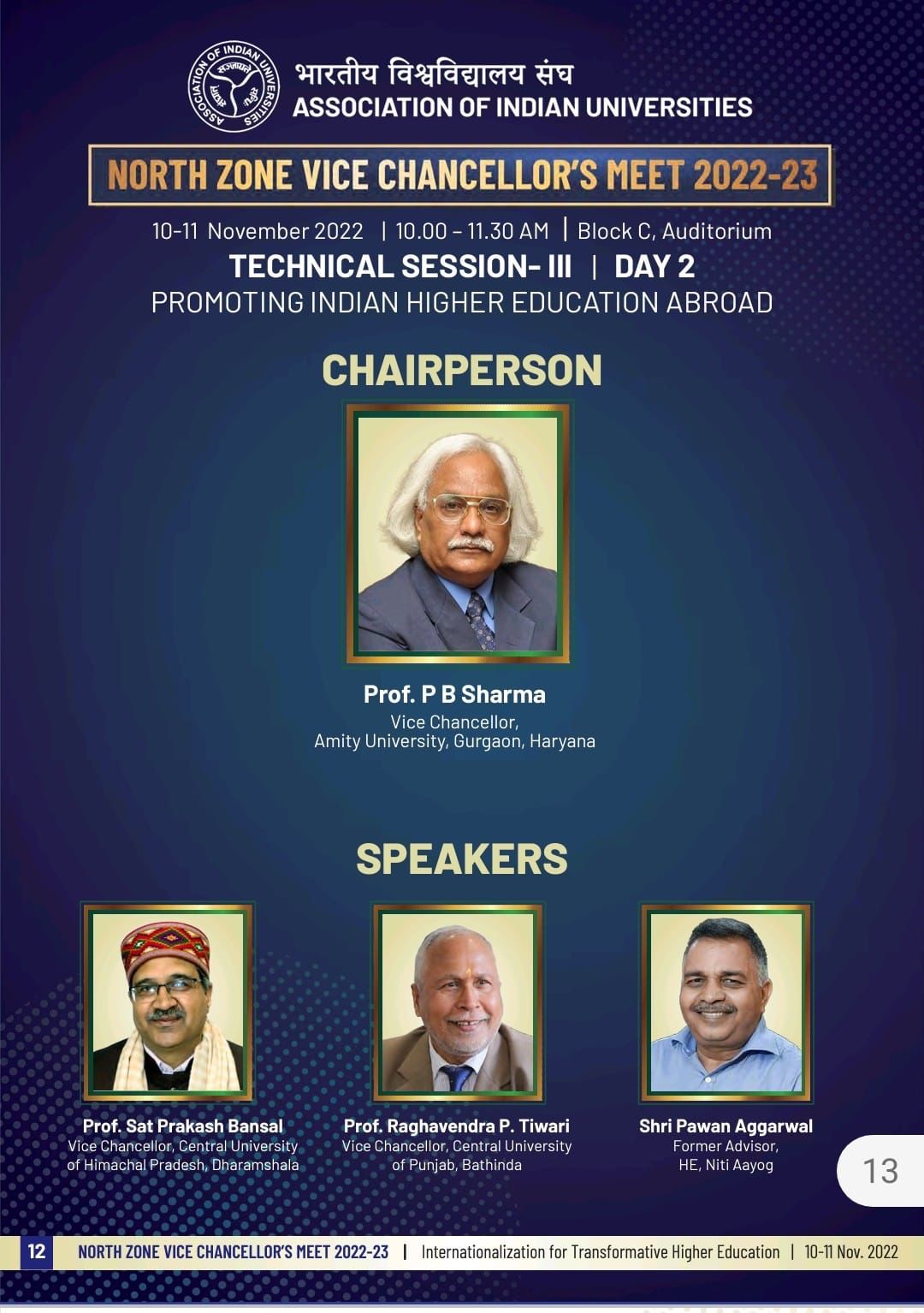 The primary question therefore is, what we need to do now to achieve the target of almost 96 lakh seats ( 25% on and above the sanctioned intake in UG and PG programs) that we have earmarked for foreign students in Indian colleges and Universities, asked Prof. Sharma, from the learned panel of speakers that included Sri Pawan Aggarwal, former Advisor, higher education, Niti Aayog and former Secretary, Government of India and Prof. Sat Prakash Bansal, Vice Chancellor of Central University of Himachal Pradesh at Dharamshala. The session was chaired by Prof. Sharma, past President of Association of Indian Universities, AIU and the founder Vice Chancellor of DTU and RGPV.

Eminent panel speaker Pawan Agrawal in high highly thought-provoking address opined that we need to focus on knowledge diplomacy and on branding India’s higher education. He suggested that like Fulbright scholarship emerged as a brand attraction for scholars from around the world, including  India to go to USA for research and studies in world class universities, we in India today should create such a brand attraction by instituting highly competitive such like coveted fellowships to attract scholars from all over the world to come to India for studies. Pawan Agrawal also suggested that this is the right time to think in terms of coining the idea of U-20, a university leaders group from top 20 nations of the world to deliberate and discuss global cooperation and provide leadership to facilitate global growth of quality education and research in universities in nations around the world.

Citing his own example, Prof. Sharma said that when India was not economically so strong, the Indian Government used to have a good number of scholarships for talented Indian students to go abroad for higher studies. These included National Scholarship for higher studies abroad which was awarded to me along with many others for PG and Doctoral level research in universities in advanced countries of the world. This enabled the talented Indian minds to obtain high quality postgraduate and doctoral education in great universities abroad and on return serve Mother India. Today, when India is roaring with a great success on its economic front, already overtaking the economy of United Kingdom and poised to be one of the top 3 economies of the world in the near future, what prevents India from launching a large number of scholarships for talented and inspired minds from abroad to come and study in  U.G., P.G. and Doctoral programs in reputed universities and colleges in India. Once the tempo of inflow of foreign students builds up due through such liberal scholarships, funded by the government of India, as well as under the sponsorships of the corporates and industries in India, we shall find that it will accelerate the inflow of foreign students to India. Those who study on India scholarships would become our ambassadors in their own countries on return and  their word of mouth and pride in India’s higher education would  inspire many more to come to India for higher studies, said Prof. Sharma, who is also the former professor of IIT Delhi.

The other eminent panelist speaker, Prof. Sat Prakash Bansal presented the essence of  National Education Policy and said that  as per the NEP-2020 “India will be promoted as a global study destination providing premium education at affordable costs thereby helping to restore its role as a “Vishwa Guru.” While research and teaching collaborations and faculty and student exchanges with high-quality foreign institutions will be facilitated, high performing Indian universities will be encouraged to set up campuses in other countries. Top 100 universities in the world will also be facilitated to operate in India as per the NEP-2020.

In the discussion that followed it was the considered opinion of the learned delegates present that internationalization be also pursued as Internationalization at Home to create a learning environment that provides ample opportunities to pursue multidisciplinary and trans-departmental interest of learners supported by flexibility and autonomy of learning. Alongside with transformative reforms in higher education and thrust on internationalization at home, it would be important to pay attention to quality of life in our university campuses, maintain good quality of air, water by leading by example in green practices and integrate ancient India’s wisdom of righteous way of sattvic life, respect for diversity and oneness of humanity, so well ordained in the famous Vedic dictum of Vasudhaiv Kutumbakam.