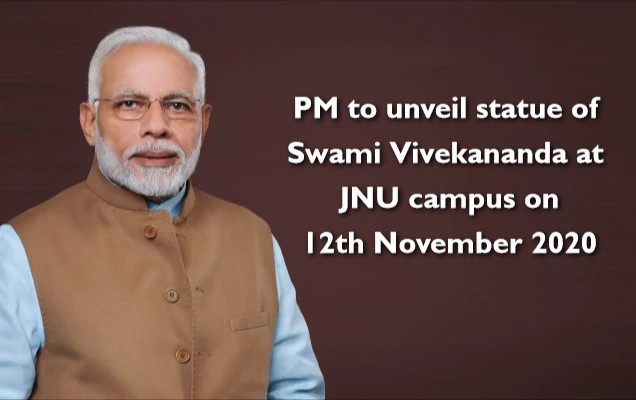 Prime Minister Shri Narendra Modi will unveil the life-size statue of Swami Vivekananda at the campus of Jawaharlal Nehru University on 12th November at 6:30 PM via video conferencing. Union Minister for Education will also be present on the occasion.

The philosophy and the mission of Swami Vivekananda beckon the youth of the country even today, and India feels proud to have had such a great personality who continues to inspire millions across the world. The Prime Minister has always said that the ideals of Swami Vivekananda are as relevant today as they were during the life of Swami ji. The Prime Minister himself has often emphasized that serving the masses and empowering the youth of the nation strengthens the country physically, mentally, and spiritually as well as enhances the global image of the Nation. Prosperity and power of India reside in its people and, therefore, empowering all alone will take the nation towards achieving the solemn goal of a self-reliant India.

“Hunar Haat” After about 7 months with “Vocal for Local” theme resumed from 11 to 22 November 2020 in Dillihat, Pitampura