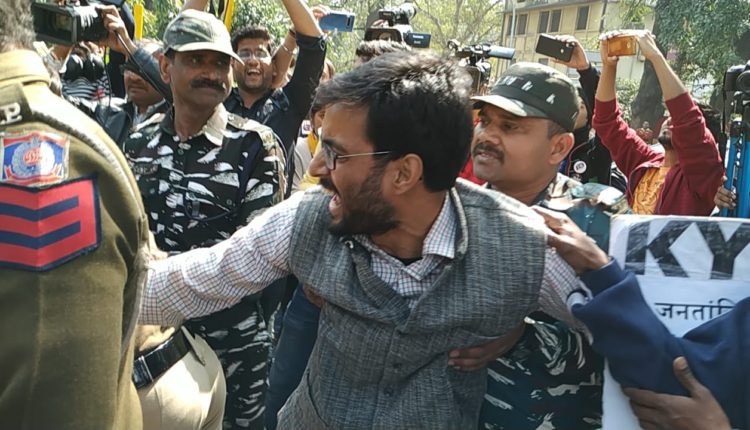 New Delhi(20/02/2020): Krantikari Yuva Sangathan (KYS) activists today participated in a protest demonstration at Uttar Pradesh Bhawan demanding the release of Dr. Kafeel Khan. Delhi Police in its usual self undemocratically imposed Sec 144 and stopped protesters to hold the peaceful demonstration, Activists and common people were manhandled and hurled into buses, more than 100 were detained. It should be noted that Dr. Kafeel was arrested few days ago, and charges under anti-people National Security Act (NSA) were slapped on him.

“KYS not only condemns in the strongest possible terms the CAA and proposed NRC. It also condemns the atrocities committed by the state governments in Uttar Pradesh on people who have been protesting against the act. The act which has earned notoriety worldwide for openly discriminating against the Muslim community has been firmly supported by the communal BJP government. In its hubris and quest to reap cheap political benefits, it has even violated the principles of the Constitution of India, which has specifically laid down injunctions against discrimination based on religious affiliation.” Said KYS.

“KYS strongly opposes the move of BJP Govt and sees in it the diabolical motive of subverting the institutions of the country as well as the freedom of the common people and dissenters who oppose BJP’s anti-people policies. It demands complete repeal of UAPA, NSA laws and colonial era sedition law. KYS would, in the coming days, strengthen its movement against BJP’s anti-people policies.”