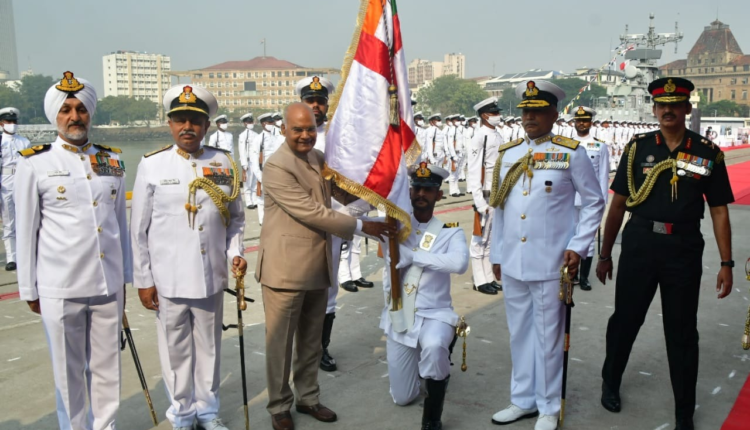 Speaking on the occasion, the President congratulated all officers and sailors associated with the 22nd Missile Vessel Squadron for achieving this feat. He said that the presentation of the Standard is a testimony to the exceptional service rendered by officers and sailors, past and present, of this squadron to our nation.

The President noted that the ships of this squadron have been deployed for a multitude of operations. They are securing our maritime borders through mission based deployments. They are also undertaking diplomatic missions in the Gulf of Oman and Persian Gulf and anti-piracy operations.

President said that India is a maritime nation and the Indian Navy has a huge role to play in furtherance of our foreign policy and in protecting our national interests and commercial aspirations. It is a matter of great satisfaction that the Indian Navy has been successfully safeguarding our extensive maritime interests with resolve and tenacity. He said that a large share of global maritime trade transits through the Indian Ocean Region. Therefore, maintaining peace and tranquility in this region is of paramount importance, not only for us, but also for the entire global community. Today, as one of the largest navies in the world, the Indian Navy is looked upon by our maritime neighbours as a preferred security partner in the Indian Ocean region, he added.

The President said that the emerging geopolitical challenges in the Indo-Pacific region present India with an opportunity to play a pivotal role. He noted that as one of the leading navies of this region, the Indian Navy has invested significant effort in meeting all regional commitments and furthering our engagements with partners in the Indo-Pacific