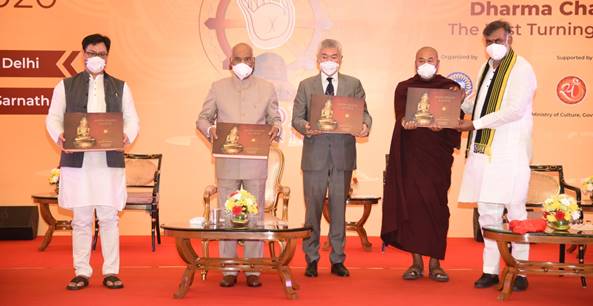 The President of India, Shri Ram Nath Kovind said that as the pandemic of Covid 19 ravages human lives and economies across the globe,  Buddha’s message serves like a beacon. Lord Buddha advised people to shun greed, hatred, violence, jealousy and many other vices to find happiness. Contrast this message with the hankering of an unrepentant mankind indulging in the same old violence and degradation of nature. We all know that the moment the virulence of Coronavirus slows down, we have a far more serious challenge of climate change before us.

The President was speaking at a virtual event organized by the International Buddhist Confederation on the occasion of the Dharma Chakra Diwas at Rashtrapati Bhavan today (July 4, 2020).

The President said that India is proud of being the land of the origin of the Dhamma. In India. Lord Buddha’s enlightenment, and the subsequent preaching by him for over four decades, were in line with India’s tradition of respect for intellectual liberalism and spiritual diversity. In modern times, two exceptionally great Indians – Mahatma Gandhi and Babasaheb Ambedkar – found inspiration in the words of the Buddha and went on to shape the destiny of the nation.

The President said that following in their footsteps, we should strive to hear the call of Buddha, to respond to his invitation to walk the Noble Path. The world seems full of suffering, in short term as well as in long term. There are many stories of kings and affluent people suffering from acute depression who took refuge in the Buddha to escape cruelties of life. Indeed, the life of the Buddha challenges earlier convictions as he believed in finding a deliverance from suffering in the midst of this imperfect world.

In his video address Prime Minister of India, Shri  Narendra Modi conveyed his greetings on AshadhaPoornima, also known as Guru Purnima, and also paid homage to Lord Buddha. He expressed happiness that copies of Mongolian Kanjur are being presented to the Government of Mongolia.Prime Minister talked about the teaching of Lord Buddha and about the eight-fold path which shows the way towards the well-being of many societies and nations. He noted that Buddhism teaches respect for people, women, poor, for peace and non-violence and these teachings are the means to a sustainable planet.Prime Minister said that Lord Buddha spoke about hope and purpose and saw a strong link between the two. The Prime Minister spoke about how he is hopeful about the 21st century, and this hope springs from the youth. He underlined that India has one of the largest start-up ecosystems where bright young minds are finding solutions to global problems.

Speaking on the occasionUnion Ministerof Culture (Independent Charge) Shri Prahlad Singh Patel expressed his gratitude towards International Buddhist Confederation (IBC) for organizing this event. Shri Patel said that the thoughts of Lord Buddha have crossed geographical boundaries and today his message is light for the whole world.The Minister added that the Culture Ministry has again put the copies of Mongolian Kanjur in front of the country and abroad. Shri Patel presented the copies of Mongolian Kanjur to President of India Shri Ram NathKovind and Ambassador of Mongolia to India H.E Mr. Gonching Ganboid and said that Culture Ministry has decided to deliver these copies in all the Monasteries of Mongolia. Shri Patel added that it has 108 sections and we are  printing five volumes, but it is our resolution that we will take all 108 volumes to them.

Mongolian Kanjur , the Buddhist canonical text in 108 volumes is the most important religious text in Mongolia. In Mongolian Language ‘Kanjur’ means ‘Concise Orders’ the words of Lord Buddha.With the inspiration of the Prime Minister Shri Narendra Modi, the Mongolian Kanjur are being reprinted by the National Mission for Manuscripts under the direction of Professor LokeshChandra.

Minister of State for Minority Affairs, Shri Kiren Rijiju said that Dharma Chakra a and Pravartan Sutra in Sanskrit is also known as the first turning of the wheels of the dharma which comprise of four noble truths and noble eight fold paths. Shri Rijiju added that the values and teachings of Buddhism are very much at heart of India’s ethos and cultural identity. Minister further said that Historical legacy of our great land being the land of Buddha’s enlightenment and awakening connects us intimately with not only Buddhists but everybody who understand and follows Buddhism and everyone who values love, compassion around the world. It binds us very strongly with every Buddhist nation. ShriRijiju said that inBuddhism the moon is the enduring symbol of truth and enlightenment. As we approach Asadha Purnima one of the most auspicious full moon day in what is being termed as extremely testing year for humanity collectively we must work towards upholding truth principles and teachings of great Buddha to achieve a mutually beneficial coexistence and prosperity of all the humankind.

The Dhamma Chakra Day celebrations are being organized by the International Buddhist Confederation (IBC) in partnership with Ministry of Culture, Government of India. This follows  a very successful hosting of Virtual Vesak and Global Prayer Week from May 7- 16, 2020 by IBC and Ministry of Culture. Royalties, Supreme heads of the Buddhist Sanghas and Eminent Masters and Scholars from around the world and IBC chapters, member organizations are participating.

PM addresses on the occasion of Dharma Chakra Day