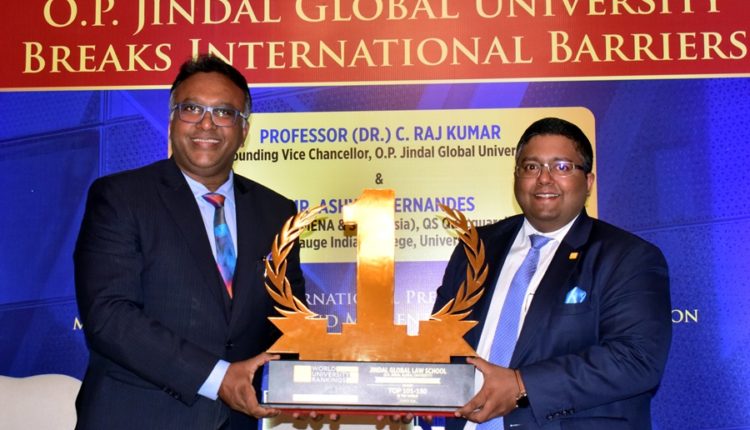 New Delhi (04/03/2020): The Jindal Global Law School (JGLS) has made history by breaking into the prestigious QS World University Subject Rankings 2020 in Law for the first time. It has earned this global recognition in a short span of barely one decade.

The QS World University Subject Rankings 2020 has just been released from London by Quacquarelli Symonds. Of the only two law schools from India that have entered law subject rankings, JGLS has secured the top number one position.

Ashwin Fernandes, Regional Director, QS Quacquarelli “I am delighted that for the very first time, in our QS World University Rankings by Subject in Law, we not only have a young institution – but also one that is top in India. O.P. Jindal Global University has been ranked in the 101-150 range in Law, while being ranked first in India, having veteran National Law School of India University, Bengaluru just behind in the 151-200 range, having the second rank in India.”

QS Subject Ranking in Law measures the global relevance of institutions specifically in the area of research in law along with combining reputation from the academic community and employers. The methodology is subject sensitive and looks specifically at universities or institutions which have a strong focus in law. Hence only the best 300 law schools globally make it to the list,” said Fernandes.

Reacting to this significant achievement, Naveen Jindal, the benefactor and founding Chancellor of O.P. Jindal Global University observed, “This is truly a red letter day in the history of JGU and JGLS. The recognition of JGLS as the Number 1 law school in India and among the top 150 in the world by the reputed QS World University Rankings 2020 by subject is a historic achievement. My congratulations to the Vice Chancellor, faculty members, students and staff of JGU whose untiring efforts over a decade have resulted in this amazing recognition. We established O.P. Jindal Global University (JGU) as a tribute to my father Shri O.P. Jindal, who deeply believed in the transformative power of education and its impact on nation building.”