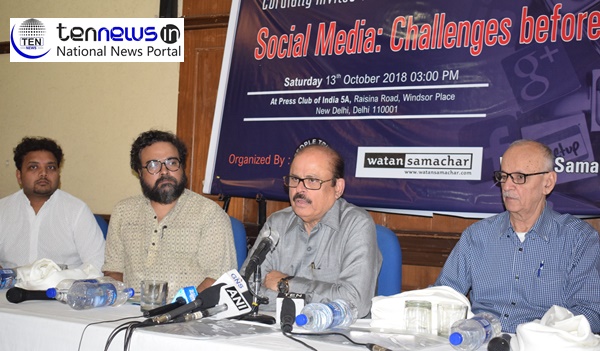 Seminar on “Social Media: challenge before society” held in Delhi

New Delhi: A seminar about “Social Media: challenges before society” was organised today at Press Club Of India, New Delhi.

Seminar was conducted with the presence of Tariq Anwar, MP and former Union Minister and K.C. Tyagi, Chief General Secretary JDU & former MP. The seminar was organised by People Trust in collaboration with WatanSamachar forum.

Panni Anand, Editor, Aajtak.in on the occasion talked about media from generation to generation. He said,

“The most advanced communication system till date is online media . People used to connect with others with the help of birds which carried messages from one place to another. But today, Internet made people get to know about facts happening across the world just by a simple click in internet. People today use to share any thing on social media but most of them never realize, what for he/she is sharing something on social media and what impact could it deliver to the society.”

Cyber hackers are increasing in India today. These people use to buy 25-30 laptops every month which they use to collect data of people through their social accounts and blackmail them using their own data and when they are done, they re-sale these laptops.
Most of them are Nigerians who settled in India for getting employed.

Renowned journalist name Qamar Agha also spoke at the occasion. He also talked about generations of media. He shared his experience and concluded with internet as the second big evolution in media, after printing press.

He said,
“It was really hard to connect with people far from us. It used to cost very high so as to connect with our people who were away from us but today, internet made things happen very easily and even at almost free of cost. Today we can even see the faces of people away while talking and just with the help of a single click. ”

According to him, Russia was the top-most country involved in social media scams and other fake things happening around us on social media.

Tariq Anwar, MP and former Union Minister addressed the seminar talking about his social media as two faces of a coin.

He further said,
“We are all familiar with the reasons behind social media’s pace of reach today. Today, whatever we are going through by different kinds of media are all going in the same direction. Whatever happening around us, may it be crime, political, religious etc. Social media, because of some corrupt users is making people fight on the basis of caste and religion, color and because of many other reasons that should not even exist. But if we look on the other side, we can see how social media is helping people to reach millions with their stories and tragedies they faced in life. If social media is not misused, it is the best way of communication today.”