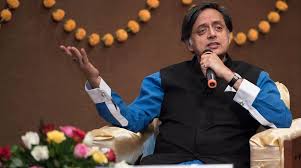 Congress leader and Member of Parliament Shashi Tharoor on Sunday created a controversy by launching a direct attack on Prime Minister Narendra Modi.

Interestingly he quoted some anonymous RSS leader to highlight that Prime Minister Modi has a style of working which isn’t even acceptable to some functionaries of his ideological background.

While speaking at Bangalore literary festival, tharoor said, “There is an extraordinarily striking metaphor expressed by an unnamed RSS source to a journalist, who expressed their frustration to curb Modi by saying that Modi is like a scorpion sitting on a Shivaling. You can’t remove with your hand as it will bite you and you cannot hit it with a ‘chappal’ either as it undermines the sacred tenets of the religion.”

The remark created huge uproar in the social media space and drew both criticism and support from different quarters of political spectrum.

BJP was quick to respond and asked Congress for an apology on the issue.

Union Law Minister Ravi Shankar Prasad responded to the remarks shortly after by doing a media briefing in Delhi.

He alleged that “Shashi Tharoor who is accused in a murder case has attempted to disrespect Lord Shiva. I seek a reply from Rahul Gandhi who claims himself to be a Bhakt of Lord Shiva on this horrific denunciation of Hindu Gods by a Congress MP.”

He also said that Rahul Gandhi must apologize to all Hindus for this remark by one of his party leader.

Tharoor however also responded to these accusations and tagged Law Minister on Twitter to ask him about which ‘murder case’ was he referring to?

Tharoor tweeted, “Which ‘murder case’ is this, or are you planning to invent one, Mr Law Minister”.

The banter is expected to continue tomorrow as well as both parties have stood grounds on their stands. While Tharoor has said that there is no insult to Lord Shiva as he himself is an ardent devotee of the God and insulting him is unthinkable for him. BJP on the other hand is persistent on the apology and has dragged Congress President also into the controversy.

Tharoor has also claimed that these remarks were in public domain since many years and he should not be held responsible for the same.

“Save Avni the Tigress”, A Candle March Prayer at India Gate