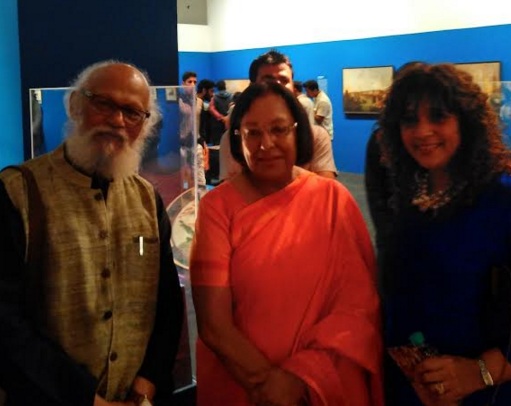 Showcasing the timeless legacy of Parsis at the NGMA

It was a packed house at the prestigious National Gallery of Modern Art (NGMA), New Delhi on 20th March’2016 as art aficionados, celebs and political stalwarts thronged the place in great numbers to witness the inauguration of two distinctive exhibitions titled ‘Painted Encounters – Parsi Traders and the Community’ and ‘No Parsi is an Island’. Much as the name suggested, on display was the priceless legacy of the Parsi culture, the life and times of the merchants, and the ingenious of the highly skilled artisans. Organized by NGMA, Ministry of Culture, Government of India, the exhibition will be showcased till 29th May’ 2016. The curators of this exhibition are Dr. Pheroza J. Godrej, Firoza Punthakey Mistree, Ranjit Hoskote and Nancy Adajania.

The event was graced by the presence of Mukhtar Abbas Naqvi, Hon’ble Minister of State for Minority Affairs and Parliamentary Affairs and Najma Heptullah, Minister of Minority affairs. While commending the works and the initiatives of NGMA, both the Ministers pointed that such exhibitions would play a key role in making the world aware about the noteworthy contribution of Parsis in different spheres. The two political stalwarts assured the august gathering comprising an impressive percentage of Parsis about all possible cooperation and support from their respective Ministries. The remarkable accomplishments of some iconic personalities too were shared during the course of the event. The exhibition titled “Painted Encounters: Parsi Traders and the Community”, which has been curated by Pheroza J. Godrej and Firoza Punthakey Mistree, has been successful in bringing to life through myriad paintings, engravings and photographs, the extraordinary evolution of Parsi traders that built ships and facilitated trade with Canton in the 19th century. Parsi merchants hailing from hamlets in Gujarat and rich from the China Trade, commissioned Indian and European artists to paint portraits and were noteworthy patrons of these art forms. This exhibition scrutinizes the changing styles and influence of  the genre loosely termed as ‘Parsi portraiture’  and unravels  the riveting historiography and times of the noted Parsi traders whose ventures boosted capital accumulation, thereby helping transform 19th century Bombay into an international, financial metropolis.

On the other hand, the exhibition ‘No Parsi is an Island’, curated by Ranjit Hoskote and Nancy Adajania with Pheroza J. Godrej, happens to be a curatorial re-reading of the work of 14 Parsi artists spanning 150 years, from Pestonji Bomanji (1851-1938) to Gieve Patel (b. 1940). This exhibition displays for the first time the rich and diverse contributions of the artists to the domains of film, poetry, theatre, classical dance, crafts activism and children’s literature. Both the exhibitions are unique and splendid as they help revive the sheer magic and exuberance of Parsis in different fields.

The guests and the special invitees to the inauguration event seemed enthralled as they spent a great deal of time admiring the brilliant collections. Sharing her views about the two mega scale exhibitions in an exclusive chat with Ten News, Minister Najma Heptullah said, “The curators, the artists and the NGMA needs to be lauded for organizing an exhibition of this magnitude. The NGMA spearheaded by its director Rajeev Lochan deserves all round praise for organizing a big scale exhibition like this. The Parsi community has perpetually brought rich laurels to the country and are, known to have significantly contributed to the economy since time immemorial. The curators have done a remarkable job in bringing to fore the excellence of Parsis in different fields to make people aware about their humungous contributions on a global level.

Famous Ghazal singer Penaz Masani added, “Kudos to the organizers of this magnificent exhibition who have assiduously worked to showcase the immortal creative works and contributions of Parsis to the world.  The exhibition will not only help bridge gaps and break barriers, but also help address the germane issues of Parsis.”

Mukhtar Abbas Naqvi expressed optimism on how such exhibitions would help address a lot of key issues, as well as help people appreciate and admire different cultures and traditions.