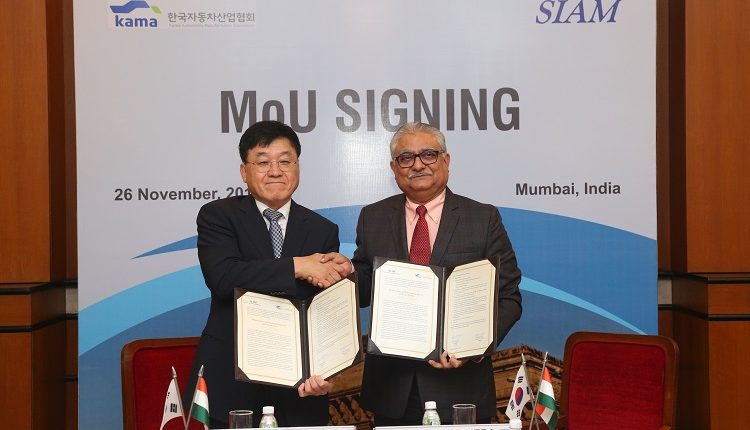 Mr Rajan Wadhera, President, SIAM and Mr Jeong Marn-Ki, President & CEO, KAMA signed the MoU, which institutionalised the framework for a cooperative dialogue between the two organisations to support each other’s efforts in promoting a sustainable, safe, clean, affordable and efficient automobile industry.

Both the organisations have been regularly interacting in various meetings including meeting of OICA and APEC Automotive Dialogue. Highlighting their rich history of cooperation, Mr Rajan Wadhera said, “In context of the auto sector, ties between India and South Korea can be traced back to when Hyundai Motors entered the Indian market in 1996. Indian manufacturers, like Tata Group and Mahindra & Mahindra, have made significant investment in Korea’s auto industry till date. Since the year 2000, these companies have invested USD 3.8 billion in India across various sectors such as electronics, automobiles, metallurgy, earth movers, etc. Recently, Kia Motors has entered India. The success of these ventures is a reflection of the strong ties between both the countries and associations. We hope that this MoU will benefit both the organisations in facilitating further collaboration in areas of technology advancements, and research & development in the automotive sector.”

Mr Jeong Marn-Ki, President & CEO, KAMA said, “I hope that today’s MoU ceremony between our organizations works as a catalyst to strengthen our ties so we can enjoy mutual benefits, constantly increasing investment and trade between both countries.”

The MoU ascertained that both the organisations will set up regular information exchange mechanism to maintain their cooperative dialogues and deliberate on issues on the subjects of their common interests.