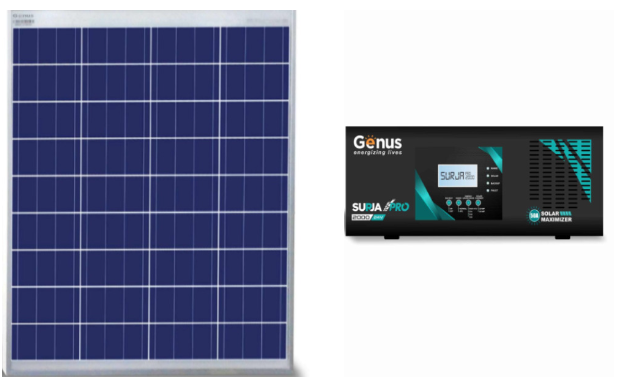 What most people don’t understand while installing a solar panel for a home is that the panel is not the most important part of the solar energy system. Even though it is the foundational block and responsible for converting the solar energy received from the sun into electricity, it has several limitations as well. The electricity solar panels produce is direct current or DC. Something that the appliances in your home or office can’t actually use unless they are converted into alternating current or AC. This is where solar inverters come into play.

What is a Solar

Inverter In simpler terms, a solar inverter is the driving force behind solar panels. What a solar inverter does is it takes the DC generated by the solar panels on your rooftop and converts it into AC power which the TVs and fans and lights in your house require in order to work. If you think about it, this conversion is more important than converting solar energy into direct current as DC doesn’t have so many applications in our daily life. So it doesn’t matter how much solar energy the panels can capture, what matters is how much usable electricity they can produce from that solar energy. And this is the job of a solar inverter.

While they started as a device that converts DC to AC, inverters have evolved quite a lot over the past few years. Modern inverters are now capable of performing a lot of different tasks like data monitoring, advanced utility controls, ensuring safe system operations, storing excess solar energy, reporting on power production and more. There are now several different types of inverters as well with different purposes, power capacity and uses.

String inverters are the most commonly used solar inverter. It is popular among household as well as commercial owners thanks to its low cost, easy installation, maintenance, and quick replacement thanks to it having just one point of failure.

For a string inverter, solar panels for home are connected in series with each other forming a long ‘string’. This arrangement has the disadvantage that if even one panel is shaded or not working properly, the entire output would be affected. Since the panels are connected in series, the inverter can only perform as per the level of the least productive panel and the resulting power generated will also depend on the power generated by the one shaded panel.

As the name suggests, microinverters are small inverters. And since they are small, these inverters can be placed underneath individual solar panels. This way, every solar panel has their own microinverter which leads to greater efficiency and power production.

Now, even if one solar panel for home is shaded, the overall energy production won’t be impacted as other panels would still be able to operate at full efficiency. These inverters provide a lot of flexibility to the installer. If you live in a place where there is a lot of shade or obstruction surrounding the solar panels, a microinverter is a great choice. You can even install the system with one microinverter and then add on it if the need arises.

These inverters are a combination of grid-tied and off-grid inverters and are quickly becoming a popular choice for several homeowners. With the help of these inverters, a homeowner can reduce their dependency on the power grid without cutting it down completely.

They can utilize the energy produced by the sun during the day and store it batteries to be used at night or for other purposes. However, they also have the opportunity to turn back to grid power when there is no sun or their power requirements are high. These hybrid inverters use the ‘DC Coupling’ technique to interface the battery with the inverter. If you live in an area with excessive load-shedding or frequent power outages, a hybrid inverter could be a sensible option.

As you can see, a solar panel for home, while important, doesn’t constitute the entire solar energy system. A solar inverter is just as important, maybe more important, than the different types of solar panel available out there and the kind of inverter you choose will directly reflect the amount of power you can utilize and how much independence you can get from the central grid.

Faisal- The Man on a Mission