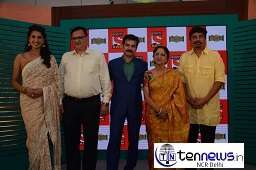 Tell your funny story and relive it along with the world all over again on television! Sony SAB will now give a sneak peek into the funny incidences of the lives of their viewers with its new show, Khidki. The show’s concept revolves around stories that have been sent in by viewers all over India. Some of these select stories are being adapted into mini-series of episodes for the small screen. Khidki is slated to go on air on Tuesday, 28th of June 2016, every Monday to Friday, 21:30 hours only on Sony SAB.

The channel in partnership with well-known television producer JD Majethia and Bollywood director Umesh Shukla of Oh My God fame had called in for entries for the show in the month of March 2016. Over 8000 entries have been received by the channel, of which, some of the shortlisted stories are now ready to be presented to the world.

The show will have a set of recurring actors like veteran Sarita Joshi, Rajeev Mehta, Lubna Salim, Aishwarya Sakhuja to name a few who will portray different characters in different stories, along with narration by JD Majethia, who is also the host of the show. Each story will be weaved into episodes designed to last for minimum of three to eight episodes, depending on the length of each story.

Comment:
Mr. Anooj Kapoor, Senior EVP and Business Head, SAB TV
“We at SAB have always brought unique and different concepts for our viewers. With this project we are opening the doors to those Indian families who want to share their funny stories with the world. SAB TV will provide a platform on which these stories which will be showcased, a new story every week.”

Khidki premieres on Tuesday, 28th June, every Monday to Friday, 21:30 hours only on SAB TV!

‘A SCANDALL’ FILM PROMOTION IN DELHI!