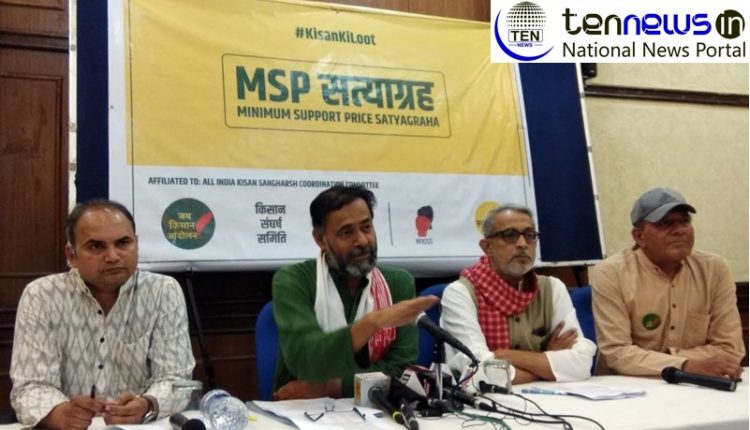 New Delhi – Madhuresh, National Convenor, National Alliance of Peoples Movements (NAPM): Farmers Organisations and alliances all over the country shall be invited to participate in MSP Satyagraha; constituents of NAPM shall actively participate in several states

Minimum Support Price (MSP) is at the heart of the existing system to ensure fair and remunerative returns to farmers. Thus MSP is a solemn guarantee to the farmers to the effect that the Central Government shall ensure a floor price, should the farmers fail to get even that level.

The Finance Minister’s budget speech of 2018 laid special emphasis on the Central Government’s commitment to ensure MSP to the farmers. Mr. Jaitley announced and assured that his Government had already implemented (for majority of Rabi crops) and was going to further implement (for unannounced Rabi and Kharif crops) its electoral promise of ensuring prices that yield at least 50% returns over the cost of production. Farmers’ Movements have already exposed this claim to be a case of sleight-of-hand. Mr. Jaitley has already admitted that the cost he was speaking about was not comprehensive C2 cost but partial cost known as A2 + FL.

The Finance Minister and subsequently the Prime Minister also admitted that increasing MSP is not adequate and it is more important that farmers should get full benefit of the announced MSP and for achieving this, the Government was going to take special steps this year to ensure that all farmers actually get the MSP announced by the Government. The Finance Minister further promised that if prices at agriculture produce markets is less than MSP, then the Government shall purchase either at MSP or provide MSP to the farmers through some other mechanism; Niti Ayog, in consultation with Central and State Governments, shall put in place a fool-proof mechanism so that farmers will get adequate price for their produce.

However so far the signals are not very good. In the first few weeks of this marketing season the prices of Bengal Gram (Channa) have fallen substantially below the  MSP of Rs.4400 (MSP of Rs.4250+ Rs.150 bonus). The official  Agmarknet data for the first week of March shows that the average modal price of Channa is  anywhere between Rs. 800 to 1000  below the MSP , also substantially below the prices last year . Sadly much of this loss was avoidable as the Government knew about greater sowing acerage and expected bumper crop of Bengal Gram. Despite this, the Government allowed substantial quantity of Bengal Gram to be imported.  In fact the import during April-November 2017 was 7.47 lakh tonne compared to 2.49 lakh tonne during the same months in 2016. So far, the state response has not been up to the mark. Maharashtra has announced procurement of just 4 lakh tonnes against an estimated arrival of 19 Lakh Tonne chana. MP’s Bhavantar Yojna has run into difficulties. So far we know little about special measures that the Niti Ayog was to evolve to support the farmers.

The price situation of other crops is also a cause for concern. Rapeseed oil has also started arriving and is selling around 3,500 against the MSP of Rs. 4000 (MSP 3,900 plus bonus of Rs. 100). Lentil (Masur) is selling between Rs. 3,200 to 3,800 against the MSP of 4,250. Would this trend continue for the rest of the marketing season? Will Wheat fetch MSP outside the handful of states where substantial procurement takes place? The answer lies in making field enquiry at the ground level in the agricultural markets (mandis) during the marketing season.

Jai Kisan Andolan of Swaraj Abhiyan has taken up this challenge in collaboration with many other organisations from within All India Kisan Sangharsh Coordination Committee (AIKSCC) like National Alliance of Peoples Movements (NAPM), Ryathu Joint Action Committee (Telangana) and Kisan Sangharsh Samiti (Madhya Pradesh). An MSP Satyagraha is being launched from 14th March 2018 at Yadgir in Karnataka. In this Satyagraha, the plan is to travel from mandi to mandi and hold Kisan Darbar with twofold objectives:

1.   To make farmers aware of the multiple ways in which they are looted and to raise demand for legal entitlement of fair MSP
2.   Check out whether farmers are able to get MSP that they have been assured of

MSP Satyagraha is designed in the true spirit of Gandhian Satyagraha. We are on a mission to discover truth. We do not presume  non-compliance  on the part of the Government. We would invite government officials, activists, experts and the media to participate in this collective discovery of truth about MSP.

The schedule of Phase I of MSP Satyagraha is :