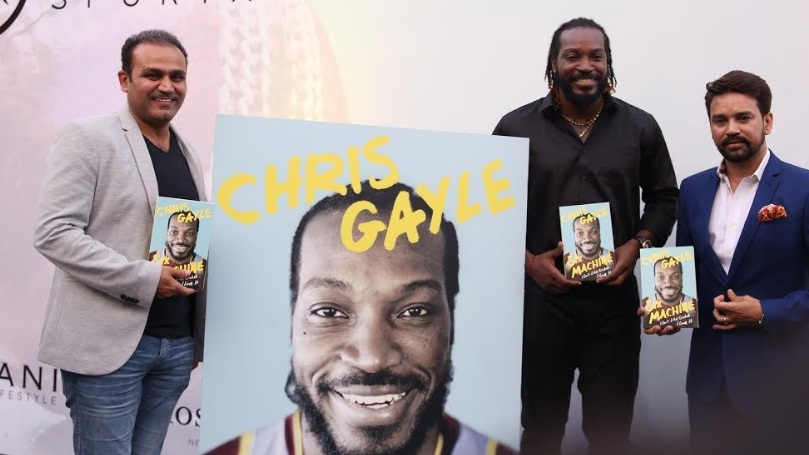 During his entire playing career, the super cricketer from Jamaica, Christopher Henry Gayle or simply Chris Gayle has been bestowed with all sorts of epithets such as hurricane, swashbuckler, entertainer, smasher, record breaker, demolisher, indomitable, fearless and so on.

Avid cricket lovers especially children love staying glued to their TV sets when their favourite star Chris Gayle comes to bat for they know it’s going to be a literal ‘Gayle Storm’ till the time he is on the ground.

Since sporting heroes are icons for countless of their fans all over the globe, there is always the craving and the curiosity on the part of the fan to gain more insights into the life and times of their favourite sportspersons.

Having enthralled his fans the world over, the sensational Chris Gayle has indubitably been one of the most entertaining and talked about stars especially in the shortest formats of the game namely the T-20 tournament and the one day limited over’s game.

Realizing the grave need for giving countless of Gayle’s fans a comprehensive insight into his life, struggles, accomplishments and aspirations, his autobiography titled “Six Machine” was officially launched in a grand event by Dunamis Sportainment in association with Penguin India on 9th September’2016. The book enables the fans and readers to know lot of interesting facets connected to their superstar, and thus unravel the phenomenon named ‘Chris Gayle’. The book is inspirational as it reveals how a person could so effectively and efficiently manage to lead such a vibrant life. After a grueling day on the field and demolishing his opponents all over the park, Gayle loves partying and enjoying life to the full. Well this is what defines the flamboyant Gayle, and makes him so adorable among his fans.

The book ‘Six Machine’ published by Viking – Penguin UK chronicles how a shy, skinny kid from a tin-roofed shack in the back streets of Kingston rose to become a top ranked star in the global cricketing arena. The book is a compelling narrative of Chris’ initial days struggle, of battling prejudices, and eventually emerging unscathed with a broad smile on his face. ‘Six Machine’ is available for INR 599 at all major online and offline bookstores.

Speaking on the occasion, Chris Gayle said, “I am really thrilled to be releasing my first book, and sincerely hope that it is successful in creating the desired impact. The book has myriad stories and secrets to be told that I have for long yearned to share with people the world over. Being me is fun, as I just don’t believe in boring. Six Machine is me, in every way.”

While launching Gayle’s autobiography, Lt. Anurag Singh Thakur, Member of Parliament and President of the BCCI, said, “The very title ‘Six Machine’ of Gayle’s autobiography speaks volumes for itself. The man has been an absolute entertainer for countless of his fans all over the world. He is one of the finest cricketers whose success will not merely be measured on the basis of the score sheet as he has mesmerized his fans with his sheer batting prowess and devastating form. The atmosphere is electric when Gayle’s on the crease. It’s a pleasure to be associated with the launch of his autobiography, and wish both the star and his book all success.”

“Chris, today, is one of the biggest sporting heroes of the world. He is an entertainer, who has gained massive adulation for his sporting genius. ‘Six Machine’ is his tale, told in his distinctive style, of life from his own perspective. We are proud to be associated with the launch, and are optimistic that the book will entertain the readers in pretty much the same way as Chris has over the years”, cheered Abhishek Misra, Co-founder, Dunamis Sportainment.

Cricketer Virender Sehwag added, “Chris is one of the most fun-loving and genuine people that I have had the pleasure to interact with. His love for cricket shines through in his batting. Gayle’s book will enable people to know the real Chris, the person behind the persona, and it’s my conviction that ‘Six Machine’ will evoke an overwhelming response from cricketing fans all over the world.”

Dunamis Sportainment, the newest sports and entertainment Management Company in town has carved a niche for itself in player and celebrity management. Besides, it also works with leading Sports networks to manufacture properties for the future.