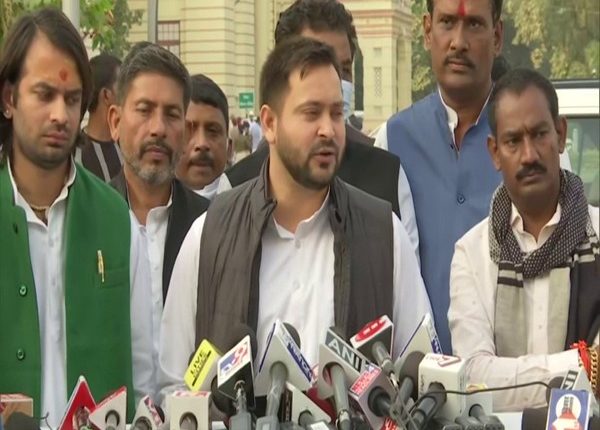 After taking oath as MLA in the newly-constituted Bihar Legislative Assembly on Monday, Rashtriya Janata Dal leader Tejashwi Yadav reminded the National Democratic Alliance government to provide 19 lakh jobs to the people of the state in the first month of its working as promised in the manifesto.

“Bihar has become the unemployment capital of the country. The public can’t wait anymore. If they are unable to provide 19 lakh jobs in the first month, then we will join the public in protests across the state,” said Yadav while addressing media after the oath-taking ceremony.

“1 crore 56 lakh voters have trusted our issues like employment, health, education, irrigation. We will not let their faith be shattered. The hard struggle will continue,” he said further.

Yadav took a jibe at Chief Minister Nitish Kumar for taking up the post despite being the leader of the ‘third-largest party’ in the assembly.

“People voted for change this time and gave their verdict. Nevertheless, congratulations to everyone. It is being heard for the first time that the leader of the third-largest party has become Chief Minister,” said the RJD leader.

He further called Nitish Kumar the ‘Bhishmapitamah’ of corruption and alleged that the Bihar Chief Minister is giving shelter to the corrupt politicians.

“Nitish Kumar is ‘ Bhishmapitamah’ of corruption. This time too he made a government from the thief door. He gave the important charge of the education ministry to Mewalal Choudhary who was involved in the infamous appointment scam, and after that, the charge was given to Krishna Nandan Prasad Verma whose relatives are involved in scams,” Yadav said.

He demanded that Chief Minister Nitish Kumar should issue a certification regarding the appointment of the new education minister and also challenged the government to prove charges of corruption against him during his tenure as the Deputy Chief Minister in the previous government.
“They were demanding my resignation even before I took charge as leader of the opposition. I challenge them to prove even one charge of corruption against me during my tenure as Deputy Chief Minister,” he added.