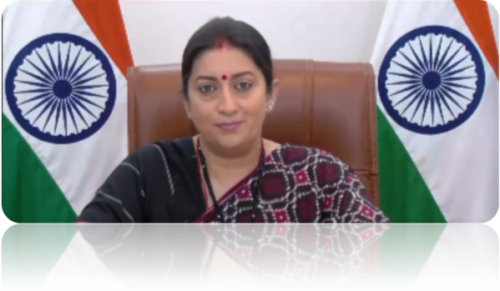 NEW DELHI, 27 September 2021: Smriti Irani, Minister of Women and Child Development (WCD), Government of India today said that many in our country want to enable more women in the organised sector speak of gender diversity. They speak of such plausible proposal within their organisations because there have been many studies that have shown gender diversities make companies report profitable and more productive.

Addressing the inaugural session of the two-day Greater 50 Virtual Conclave & Exhibition, organized by FICCI, Irani said, ‘Gender Intelligence’ is a nomenclature not often spoken about in Indian organisations. Organisations that are still flummoxed over grappling with gender diversity now need to look at gender intelligence. While gender diversity is about encouraging organisations to have more women at the workplace, but gender intelligence is about ensuring that those women stay at work.”

The Minister stated that if an organization wants to bring about gender balance, gender parity, and gender equity, it will need to recognise that the term ‘gender’ does not mean only women. It means an inclusion of every gender.

Further, Irani noted that the Greater 50 Call to Action Report highlights that the SMEs now feel overburdened at the prospect of catering to specific needs of women, which in turn, impacts their recruitment and retention of women at their workplace. “We hope that we can look at pathways to help SMEs in our country hire and retain more women,” she said.

Further, Irani said that FICCI has taken a giant step towards ensuring that not only is gender diversity is embraced but also understood and how leadership roles need to change from the perspective of gender and be all inclusive.

Speaking at the event, Uday Shankar, President FICCI said that FICCI will leave no stone unturned to address issues related to gender gap and digital divide that exist in the country. He noted that as per the Economic Survey 2020, even though women make up nearly half of our total population, the female labour force participation in India is not only low but in fact has been reducing over the years from about 33 per cent in 2011-12 to 25 per cent in 2017-18.

He further said that India’s female labour force participation is the lowest in South Asia. As a result of this low participation, working women contribute only around 17-18 per cent of the national GDP, which is much lower than the global average of about 40 per cent. Moreover, in the coming decade, nearly 75 million women are expected to enter the workforce in India.

Shankar urged the private sector to create and push for adequate job opportunities for women in their respective organizations. “This will enable aspiring women to work, contribute, succeed, and realise their true potential. At the same time, it is also our responsibility to ensure that the structural barriers that usually restrict women from accessing employment are addressed,” he added.

Dr Sangita Reddy, Immediate Past President FICCI, Chair, Greater 50 and Joint MD, Apollo Hospitals Ltd, said that with the vision of fostering inclusion at every level of economy and enterprise and enhance entrepreneurial and decision-making skills of women, the target of the Greater 50 initiative was to impact the lives of at least 1,00,000 women.

“We have already impacted 50,000 women and by end of this year the number will reach 60,000. Despite the challenging times our country faced due to the pandemic, we could deliver many impactful offerings. We have successfully aggregated several ongoing initiatives on women empowerment through collaborations with institutions like NITI Aayog and UN Women and organizations such as We HUB, Mann Deshi Foundation, Edelgive Foundation, etc., for championing the cause of women entrepreneurship,” she said.

Dr Reddy further added that special mentorship sessions in partnership with NITI Aayog have witnessed registration of more than 1000 women so far. “With Edelgive, plan is to reach out to 5000 women on the ground. Similarly with Mann Deshi, we have mentored around 300 women,” she further added.

Ujjwala Singhania, President FLO, said that when we talk about empowering the Greater 50 per cent, we talk about not only empowering women, but the families, the community and thereby the society at large and the country.

Harjinder Kaur Talwar, Greater 50 Co-Chair and MD & CEO, Comvision India Pvt Ltd said that ever since the Greater 50 initiative was launched last year by FICCI and FLO, there has been no looking back. “The Greater 50 mission has only expanded with time. The Ministry of Women and Child Development has been making sincere efforts to encourage women entrepreneurship in the country. The support from the government has been coming through in many ways- easy access to working capital, training for existing and prospective entrepreneurs, being some of them. Through progressive policies, the government has set a motion in process that will shape the future of the daughters of the country,” she noted.

Dr Jyotsna Suri, Past President FICCI and CMD, The Lalit Suri Hospitality Group, said that channelizing the available female talent for a young and new-age economy like India is imperative to not only realize the full potential of our human capital but also to empower India to attain its rightful place in the world order.

“The Greater 50 mission has strived and thrived hard to touch the lives of women on the ground-in rural, semi urban and urban areas. We must continue to come together to create conditions for them to contribute to society and economy to the best of their abilities. Through the multifarious approach and with the support of some of the finest minds in the country, we aspire to touch the lives of many more women and help them realise their dreams for themselves, their families, and the nation,” she said.

Rajashree Birla, Chairperson, FICCI Aditya Birla CSR Centre for Excellence the Greater 50 initiative is among the most significant initiatives of FICCI and FLO. “It opens to door to the journey of self-reliance,” she said.

Dilip Chenoy, Secretary General, FICCI said that FICCI has been honoured to get the guidance of visionary leaders and experts who are so passionate about the cause of women empowerment and have enabled us to execute a result-oriented action plan to create a supportive ecosystem for women to be what they want to be.

Vidya Shah, Executive Chairperson, EdelGive Foundation, said, “Entrepreneurship plays a crucial role in ensuring the socio-economic inclusion and empowerment of women, especially in rural and semi-urban settings. Fundamental to achieving this, are multi-stakeholder partnerships that enable a conducive environment for entrepreneurship, gender equity and level playing fields for all. In this context, the Greater 50 conclave is a bold and positive initiative that aims to leverage the potential of partnerships to facilitate mentorship, capacity and knowledge building, and grassroots awareness. Strategic alliances such as the one between EdelGive Foundation’s UdyamStree and FICCI’s Greater50 campaigns ensure and envision an enabling environment for women entrepreneurs in India, and work towards achieving an inclusive macro ecosystem.”

The Greater 50 – We Hub Incubation Programme was launched at the event. Two reports- Greater 50 Compendium on Positive Stories and Greater 50 Call to Action Report were also released in the presence of the minister.

The first ‘physical’ show for the food and hospitality sectors, IHE2021, concluded