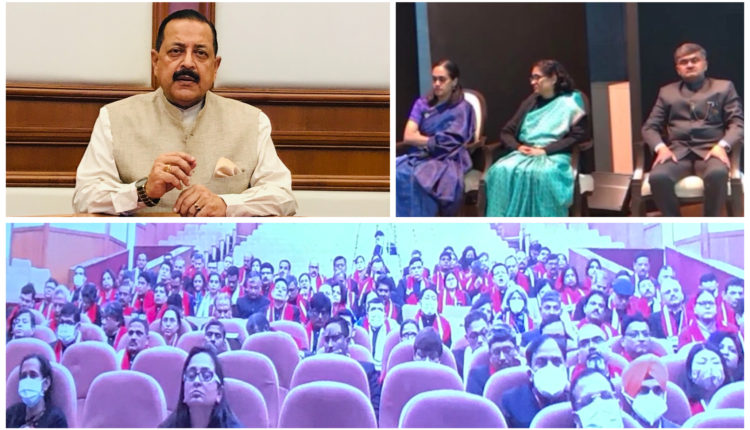 Referring to Prime Minister’s 75th Independence Day Address from the ramparts of the Red Fort, Dr Jitendra Singh said, today the world is also a witness to how India is writing a new chapter of governance here and in this decade of ‘Amrit Kaal’, we will give priority to Next Generation reforms. He also reiterated Modi’s Commitment to ensure that all the facilities like service delivery should reach citizens up to the last mile and it should reach the last person seamlessly, without hesitation or any kind of difficulty.

Dr Jitendra Singh also pointed out that since 2014, when Modi became Prime Minister, in every Independence Day speech, there are some observations and announcements related to Governance. He said, soon after taking oath as Prime Minister on 26th May, 2014, one of the earliest reform Mantra given by Prime Minister was the maxim “Minimum Government – Maximum Governance”. He said, in the last 7-8 years a series of reforms was undertaken to encourage greater efficiency, transparent and corruption free governance, accountability and reduce scope for discretion.

Referring to a series of path-breaking and out of box decisions since May 2014, Dr Jitendra Singh said that the decision to do away with the time old practice of getting documents attested by a gazetted officer and replacing the same with self-attestation, abolition of interview for all Group-B (Non Gazetted) and Group-C posts in the Central Government from 1st Jan 2016 itself, amendment in the Prevention of Corruption Act, 1988 and three-month Central Government stint as Assistant Secretaries for IAS officers in the beginning of their career are far reaching in nature.

Dwelling on the relevance of Sardar Patel Leadership Centre, Dr Jitendra Singh said, the Centre aims to lay the foundation capacity building for future generations of Civil Servants so that they learn from the best practices of leadership across the world while at the same time they remain connected with their cultural ethos, values and roots. He added that good governance, Jan Bhagidari, and Jan Chetna needs good leadership skills among the field officers as well as officers at the policymaking level. He said, the Sardar Patel Leadership Centre will emerge as a Huge Resource Centre to provide continuous study and learning opportunities to Civil Servants from India and Abroad as visualised by the Father of All India Services.

In his address, K Srinivas Director, Lal Bahadur Shastri National Academy of Administration (LBSNAA) said that the objective behind this centre’s establishment is to enable a civil servant to constantly remain in touch with Sardar Patel Leadership Center, an entity that can provide them with upgraded skills and guidance for their own personal pathways. He added that every officer must determine their own path of self-guided learning in the spirit of Mission Karmayogi.