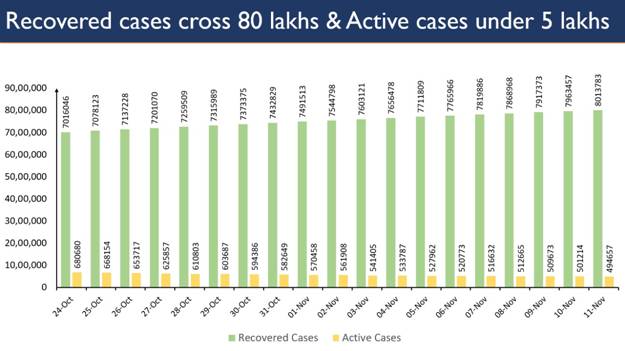 India has crossed several landmark milestones in its collective fight against the global pandemic. The active caseload of India has fallen under the 5 lakh mark for the first time after 106 days. Today, the total burden of active cases is pegged at 4,94,657. It was 4,96,988 on 28th July. With this, the Active Caseload stands at 5.73% of the total positive cases.

This also indicates a sustained trend of declining active cases in the country. It assumes higher significance in the context of several countries across the globe reporting a surge in the number of new cases.

This landmark achievement has been made possible by the Centre’s sustained, graded and targeted strategies, their effective implementation by the States/UTs, dedicated and selfless service of doctors and all other COVID-19 warriors.

44,281 new cases have been reported in the last 24 hours while 50,326 active cases have recovered in this period. This is the 39th Day of daily recoveries exceeding the daily new cases.

The Total Recoveries have crossed the 80L mark. The number of total recoveries as on date is 80,13,783. The gap between Recovered cases and Active cases has widened 75,19,126.The Recovery Rate has increased to 92.79%.

In another milestone, India has crossed 12 crore cumulative tests. 11,53,294 tests have been conducted in the last 24 hours in the country.

The trend of daily low cases has been made possible by an exponential increase in the testing infrastructure.

High testing has aided in early identification of the infected population, thus preventing the transmission of the virus to the non-infected.

77% of the new recovered cases are observed to be concentrated in 10 States/UTs.

Maharashtra has reported the maximum number of single day recoveries with 6,718 newly recovered cases closely followed by the 6,698 figure achieved by Kerala. They are followed by 6,157 recoveries in Delhi.

The top 10 States and UTs have reported 78% of the new cases.

Delhi has reported the highest daily new cases at 7,830. It is followed by Kerala with 6,010 cases.

Ten States/UTs account for 79% of the COVID fatalities. 512 case fatalities have been reported in the past 24 hours. Total Case Fatality Rate stands at 1.48% and continues its downwards trajectory.

Maharashtra saw the most casualties at 110. Delhi and West Bengal follows with 83 and 53 new deaths, respectively.