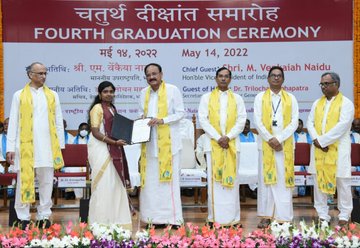 Hyderabad (14/05/2022): The Vice President, M. Venkaiah Naidu today called for enhancing the quality and capacity of agricultural research in the country to achieve substantial gains in agri-productivity in the long term. Noting that no advanced country can improve agri productivity without extension activities, Naidu suggested increasing the R&D expenditure – which is ‘less than one percent of our agricultural GDP’, he said.

Further, Naidu called for ‘every effort by the agricultural researchers, policy makers, entrepreneurs and scientists to make agriculture climate-resilient, profitable and sustainable for farmers and to ensure nutritional security’.

The Vice President was attending the Graduation ceremony of the Agri-Business Management programme of ICAR – National Academy of Agricultural Research Management (NAARM) in Hyderabad today. Naidu also presented a few select students with Gold medals and Director’s medals.  NAARM is a specialised institution of the Indian Council of Agricultural Research (ICAR), established to build capacity in agricultural research, education and extension education systems.

Speaking on the occasion, Naidu emphasised that agricultural universities must consider it their bounden duty to not only develop new techniques and methods of sustainable production, but also to take these developments to the last farmer in every part of the country. He called upon agricultural universities to encourage students to visit villages and know the actual farm issues firsthand. ‘We must imbibe the slogan ‘Lab to Land’ of Prime Minister Narendra Modi to bring research benefits to farmers to enhance production and incomes’, he said.

Elaborating on this, Naidu suggested that extension inputs to farmers should be broken down into ‘simple language, without resorting to too much technical jargon’. He also suggested exploring mobile-based extension services and to offer ‘one-stop solutions for all services, on demand, and without any clutter’.

The Vice President touched upon various emerging challenges of Indian agriculture such as reducing availability of water, climate change, soil degradation, loss of biodiversity, new pests and diseases, fragmentation of farms, among other issues, adding that this makes “the task of agricultural research even more critical in the coming years”

To tackle these challenges, Naidu called for a “paradigm shift in our research approach” and aim for excellence in technological innovation, human resources, and extension services. He also suggested investing in critical areas such as genomics, molecular breeding, and nanotechnology, among other areas. He called upon ICAR institutions to bring out synergies between agriculture and modern technologies such as drones and Artificial Intelligence and develop scalable products.

Naidu particularly stressed upon the importance of creating a skilled manpower in secondary and tertiary agriculture to make it profitable. He observed that trained agri-business graduates can work towards making agriculture more into an organised sector and become job providers instead of job seekers.

The Vice President observed that there is a pressing need to encourage farmers to take up allied activities to diversify the risk of crop failure. He also suggested adoption of agro-climatically suitable crops such as millets and  horticultural crops. Naidu called for more investments in cold storages and other infrastructure which add more value to produce and give better farm gate prices for farmers.

On the occasion, the Vice President paid rich tributes to Indian farmers and said that “no matter what came their way, be it floods, droughts or even a pandemic, our farmers have always stood tall in the face of adversities”. He observed that despite several challenges, the Indian agriculture sector “never fails to surprise with its resilience”.

Certain provisions of NEP have no clarity, B-schools’ keen to work on those opportunities: EPSI Alt President Dr H. Chaturvedi