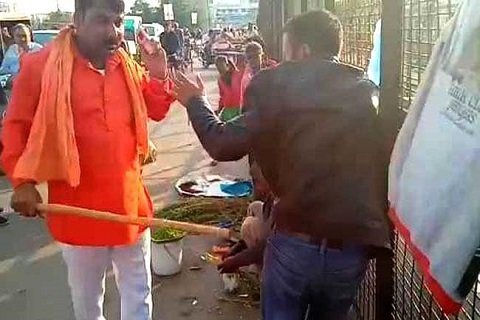 New Delhi: In a Shocking Incident, Two Kashmiri traders were assaulted on busy Lucknow Street. The duo were sitting on a busy road when they were attacked by the goons, who shared the video of the assault on social media.

In the video, a local was seen intervening and asking why were they beating up the Kashmiris, to which one of the assaulters replied: “They are Kashmiris. They are pelting stones there.”

In response, the onlooker asked them to not take law into their hands, even as the saffron-clad men demand to check the identification card of the Kashmiri vendor.

According to the Reports, The incident took place at around 5 pm yesterday in Daliganj in central Lucknow. The men who assaulted the traders can be heard in widely-circulated videos saying that are doing it because they are from Kashmir.

As per the reports, One of the accused who assaulted two Kashmiri men selling dry fruits on the roadside in Lucknow has been arrested.