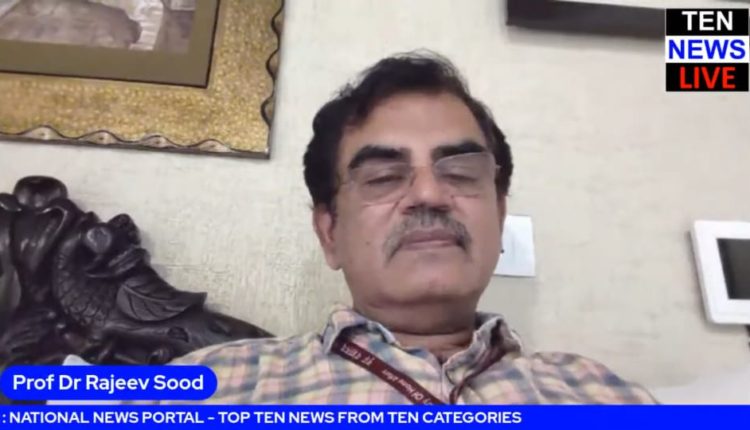 We have problem of deranged priorities: Dr Rajeev Sood on crumble of health infrastructure

The second wave of covid-19 pandemic impacted millions of citizens in the country. While many believe that there was some level of complacence on account of common citizens and policymakers, which led to most safety protocols being ignored and rapid spread of virus.

However, the country also witnessed a situation where a hospital bed, an oxygen cylinder, a ventilator machine were all became most rare commodities in the country.

So what led to this situation? Country’s eminent medical expert, Dr Rajeev Sood recently shared his insights on the issue during a discussion on the Ten News live channel.

He started by sharing how we lack adequate data to manage such virus. “There are some problems in our country. Globally, there have been more than 5000 biomarkers identified and studies ongoing directly or indirectly realted to Covid. In India we don’t we don’t have good epidemiological system. We don’t have data. And study on such large population would be very very expensive. So India as of now is adopting from studies done by other countries. But our population is different from theirs in terms of genes, environment, food habits etc. But still we are adopting their guidelines,” Dr Sood said.

Criticising the intiail vaccine-hesitancy in the country, he added, “Vaccine is not accepted by many people. Some of the politicians were saying this is the BJP vaccine. Some people were saying we won’t take this vaccine or that vaccine. Social media is helping us as well as harming too. Among healthworkers only 31% were vaccinated. When the second wave started everyone wants a vaccine. Over 600 doctors died in the second wave. A small study was conducted on 329 people and it was found only 3% doctors were vaccinated. Those who were knowledgeable were not taking vaccine and now everyone wants it after the second wave.”

“When we talk about research finally, we should know our resources and we should know our budget. On 31st march, many hospitals returned their budget thinking covid was gone. There was pressure from bureaucracy to cut the expenses. We have research institutes, but what research is happening?” he questioned, adding one of the experiences that he once had with a policy maker.

“I once spoke to an ex-finance minister and asked why we don’t have much budget for health. It was about 20 years back, but the minister told me that we go to village they ask for roads, water etc but no one asks for health infrastructure. So in a nutshell we don’t have adequate management. We don’t create system but depend on crisis management. There has to be evolution of a system,” Dr Sood concluded.