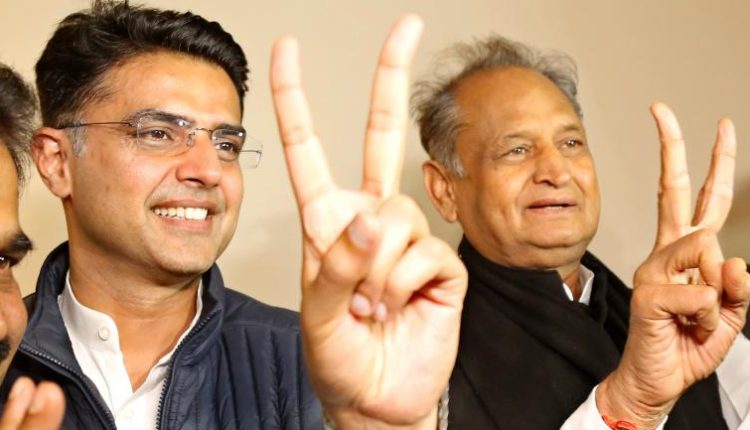 Greater Noida (14/12/2018) : Late Thursday night the suspense of who would become the Madhya Pradesh chief minister ended, however in Rajasthan the political dust storm is still brewing.

It is being reported, that though Congress leadership is more in favour of mirroring the MP formulae in Rajasthan- preferring experience over youth, the Pradesh Congress common chief Sachin Pilot isn’t relenting.

At the moment when MP congress was announcing CM, Sachin Pilot was reportedly meeting Rahul at latter’s home in Delhi. This wasn’t the first meeting between the two in the day.

Sachin Pilot, who has worked with the Delhi Bureau of British Broadcasting Corporation and with General Motors before he entered mainstream politics, is in fray with two-time Rajasthan CM Ashok Gehlot to become the chief minister of the state.

While Gehlot, seen close to Gandhi family has experience as his USP, it is indeed Pilot who has worked hard on ground since after 2014 debacle.

Gehlot, who once was fondly called as ‘Jadugar Uncle’s by Rahul and Priyanka Gandhi during their childhood days, has spent most of his time in Delhi.

The past anecdotes popular in political circle is that during his initial years in politics, Gehlot had to spend large time waiting for a meeting with then Congress bosses and he would bond with family kids by showing them magic of cards, thus earning him the moniker at that time.
However as of now, how well would his magic work, is yet to be seen.

Sachin’s entry into politics was a remarkable one. He bagged a margin of 76,000 votes against BJP’s Kiran Maheshwari. Representing Ajmer, he was then the youngest member of Indian Parliament.

At 35, Sachin Pilot served as a minister of state for communications and IT, making him one of the youngest ministers in the then government of India.

He is married to the daughter of Kashmir’s Abdullah family and has two kids. With the logjam extending with every passing day, it looks kore plausible that Congress has to relent to Pilot’s demand and either he or a third person of his choice can be declared the Chief Minister.

However we can at best, only speculate, till the final announcement is made, which is expected anytime on Friday.

Teenage terrorist killed in Sunday encounter had cameo in ‘Haider’