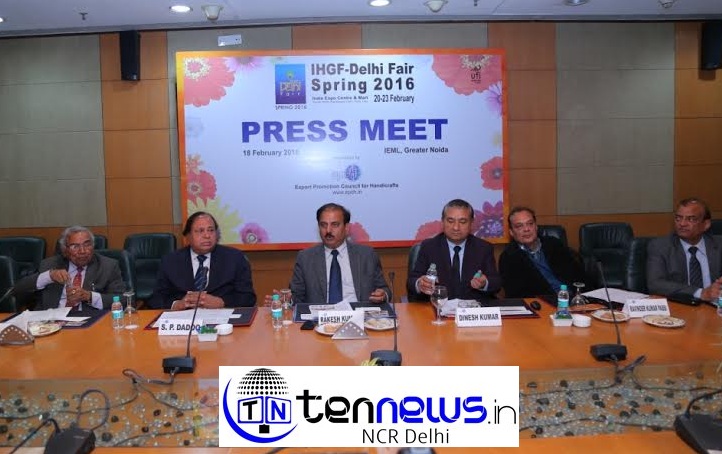 The Indian Handicrafts & Gifts fair (Spring) which started way back in 1994 by Export Promotion Council for Handicrafts [EPCH] has entered its 41st edition.

The IHGF-DELHI FAIR SPRING will be held from 20 – 23 February, 2016 at India Expo Centre & Mart, Greater Noida in a total area of 190000 with more than 2820 exhibitors including permanent marts , 2000+ products in 14 product categories, 300+ trend specific design developments.

The broad product categories will include houseware, home furnishing, furniture, gifts & decorative, Charismas & festive décor, carpets and rugs, fashion jewellery & accessories, Spa & wellness products, bathroom accessories, leather bags, lamps and lighting, stationery, educational toys and games. The quality is such that it caters to the all segments of consumers whether top end, middle end and bottom end. The uniqueness is eco-friendliness and most competitive prices. Designs, styles and presentation are contemporary, trendy and modern yet there is touch of tradition and ethnicity, informed Rakesh Kumar, Executive Director-Export Promotion Council for Handicrafts [EPCH].

The fair was conceptualized with the sole intention of providing a platform to handicrafts producers, manufacturers and exporters to export their products to the foreign buyers.

The 41st edition will have special highlights of series of seminars, ramp shows, live crafts demonstration, cultural shows elaborated, setting up of e-hubs and visit of domestic retail volume buyers.

Based on the indication received so far EPCH is expecting more than 5000 overseas volume buyers from departmental/chain stores, wholesaler, distributors and major International brands. The volume buyers will not only from existing markets of handicrafts in American and European continents but also from the emerging markets in the Asian continent like China, South East Asia, Central Asia Region and Africa and Latin American region.

Indian arts and crafts are known world over from ancient times for intricate workmanship, exquisite nature and exclusive designs and eco-friendly raw material base. India has uniqueness of abundance of raw material, skills, workmanship and products coming from its various regions representing local culture, usages and techniques being practiced from generations to generations. About 57% of the products produced by the artisans of India are dependent to its export market.

IHGF has been a great success. It has helped the Indian producers, manufacturers and exporters to diversify their range of products keeping the trends and demand in the International markets. It has also encouraged them to develop new designs, new raw material bases and new product range for use by consumers worldwide.

IHGF has also played a vital role in diversifying exports of handicrafts, increasing production base in the country, improving quality, design, products and thereby ultimately leading to growth of exports of handicrafts. With regard to business generated during IHGF when it was started in 1994, it was merely Rs 80 crores and by the time it reached its 40th edition in October, 2015, it was Rs. 2700 crores.

Export Promotion Council for Handicrafts [EPCH] which is a nodal agency for promotion and development of handicrafts has been organizing this fair for the last 22 years. IHGF-Delhi Fair Spring 2016 is expected to generate huge amount of enquiries and orders.

Delhi: #JNU students protest with flowers as a mark of peace during their march from Mandi House to Jantar Mantar

“Best part of IHE is that they have focused visitors”, says Rajeev Sachdeva, ED at…

IHE2022: Here’s what visitors have to say about country’s biggest…

Comments are closed, but trackbacks and pingbacks are open.