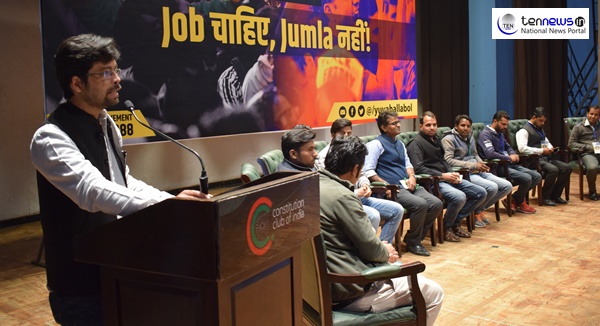 New Delhi:( 27/01/2019) On January 27, Yuva Hallabol movement held a historical “Youth Summit” at Constitutional Club of India in New Delhi where youth leaders and representatives protesting on the issue of unemployment in the country came together.

Apart from these youth leaders, groups protesting against all selection commissions and recruitment boards present in the “Youth Summit” expressed their views on deteriorating job opportunities and expose corruption in recruitments making governments accountable.

Yuva Halla Bol is not just pointing out to the flaws and failures of the government but is proposing solutions to address the crisis. The YHB have documented a well-researched proposal to the issue of unemployment and are demanding the government to implement it.

Here are the demands of Yuva Hallabol discussed in Youth Summit

# Ensure Fair Selection by ending the present regime of paper leaks, delays and corruption in the recruitment process

Slamming the ruling BJP-led NDA government Anupam said, “the BJP was elected to power on the grounds of creating employment in the country, the party has promised two crore jobs but the government was failed to materialise its promise”.